'We are so grateful': Parents of rescued 4-year-old share story

The parents of a four-year-old B.C. boy who spent 30 hours lost in the wilderness say they can't begin to thank the emergency crews and volunteers who banded together to bring their son home safely.

Tykao Hazard and Kris Benoit spent a harrowing weekend agonizing over what would become of their son, George. The little boy disappeared from their van on Saturday while Hazard and a friend were picking berries near Lions Lake, outside the small northern community of Mackenzie.

The ensuing day was full of "fear, heartbreak and anxiety," she told CTV News on Monday.

But on Sunday before dark, a police helicopter spotted George in the woods and radioed for help.

"I collapsed right there when I heard," Hazard said.

"I saw the helicopter coming in from outside town," said Benoit. "I had this overwhelming sensation of calmness…I knew right then and there our boy was home."

The child was cold and wet, but had suffered nothing more than some bumps and bruises. It was an outcome that stunned some of the first responders involved in the search effort. Cpl. Madonna Saunderson said the word "miraculous" is a fair description.

"There couldn't have been a better outcome," she said.

George's parents said the ordeal has taught them something significant: That no matter how big or small your community, people look out for each other. They said the fact that 400 friends, neighbours and strangers turned out to search for their son proves it.

"We are so grateful… more grateful than words can ever express," Hazard said.

"The only word that I can say, from the bottom of my heart… is thank you so much for finding our little boy," Benoit added. "I'm never letting this little bugger out of my sight again."

Mackenzie, which has a population of about 3,700, has fallen on hard times with mills closing and people losing their jobs according to Mayor Joan Atkinson.

But this weekend, she said, everyone put that setback behind them and dropped everything to help find George.

“It’s a clear demonstration how people in a small town, when we rally together, we get things done,” Atkinson said Monday while choking back tears of joy.

Residents are "beyond happy" that George has been found safe, she added.

“I am feeling relief, I am overjoyed,” Atkinson said.

Tamara Wiese, a friend of the family who volunteered in the search echoed Atikinson, wanted to thank everyone who brought rain gear, food, lights, and firewood to help keep warm.

“After I came home, I hugged my kids a little tighter,” Wiese said. 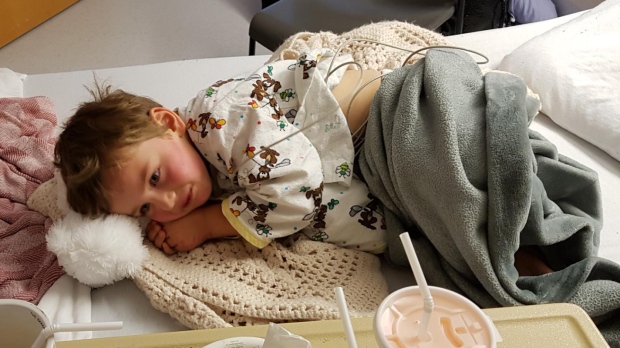