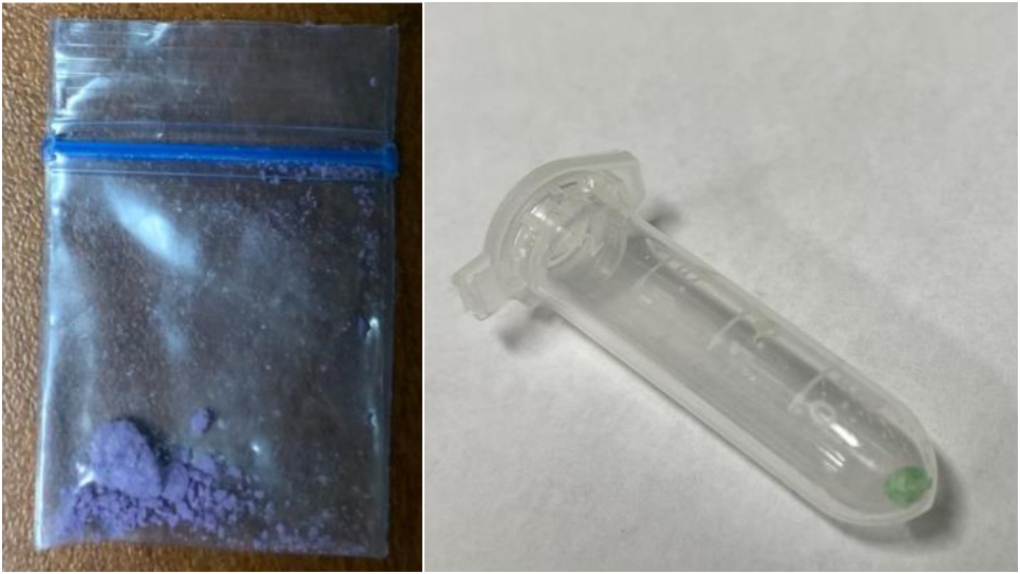 Substances being sold as down in Kelowna (left) and Penticton are shown in images from Interior Health.

Health officials are warning users to be cautious after several overdoses in the last week due to one particular substance.

Staff at B.C.'s Interior Health warned those in the region that the substance being sold as "down" comes with a high risk of drug poisoning (overdose). Long periods of unconsciousness have also been connected to the batch of down.

Down, also called "purple" or "yellow," is a name given to a dangerous mix of substances including the opioid fentanyl.

A version that became common in Winnipeg and Northern Ontario in 2020 combined fentanyl and heroin, and at the time had overtaken meth as one of the most popular street drugs in the area. Its spread was in part due to COVID-19 border closures.

The substance that is the subject of one of the warnings in the Interior is a mix of fentanyl and benzodiazepines (benzos), officials said, but it may contain the ultra-potent carfentanil, an even stronger analogue of fentanyl, as well as other drugs.

In the warning issued Thursday for the Kelowna area, officials describe the substance sold as down as "purple chunks with a chalky texture."

Interior Health urges users to get their drugs checked whether smoking, snorting or injecting them, and to avoid using alone.

The authority issued another warning the same day for those near Penticton, where another patch of down – this time "light green chunk" – has a high risk of overdose.

Officials warned it also may cause long periods of unconsciousness or sleepiness, and that with this substance, memory loss is possible.

Benzos are depressants that slow brain activity, health officials have said in previous warnings. When combined with opioids, there's a much higher risk of overdose, as the benzos can slow the body's response to medication used to block the effects of opioid overdose.

Additionally, drugs cut with benzos may make a user "difficult to rouse," or keep them unconscious during life-saving efforts such as the use of naloxone.

There's been a noted increase in the presence of benzodiazepines in recent data collected on fatal overdoses in B.C. Information collected by the B.C. Coroners Service and presented in June looked at the increasing toxicity of the local support and found benzos were present in 57 per cent of samples in April, compared to just 15 per cent the previous July.

Even more concerning is that the number of deaths involving "extreme fentanyl concentrations" continues to rise in the province.

By the time 10 months of data was collected, 2021 was already the deadliest year in the province's history in terms of illicit drug overdose. That was before the coroners service had analyzed information collected in the months of November and December.

Another startling statistic broke things down by day. B.C. paramedics said they were called to almost 100 overdoses each day last year, for a total of 35,525 calls - an increase of 31 per cent over 2020.

Workers digging through rubble found 200 bodies in Mariupol, Ukrainian authorities said Tuesday, another grim discovery in the ruined port city that has seen some of the worst suffering of the 3-month-old war.

China is trying to navigate its biggest coronavirus outbreak without a tool it could have adopted many months ago, the kind of vaccines that have proven to offer the best protection against the worst outcomes from COVID-19.