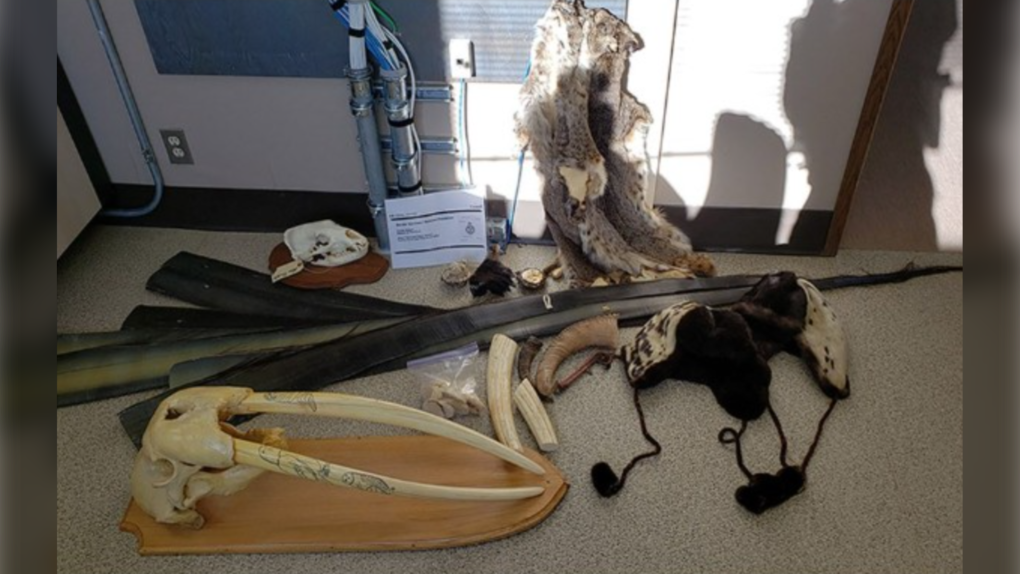 A photo provided by CBSA shows items allegedly seized in late May at a port of entry.
VANCOUVER -

A pair of Americans tried to bring a lengthy and somewhat strange list of undeclared items into Canada, border officials say.

In a news release last week, the Canada Border Services Agency outlined a list of items including firearms and animal products, which it says were seized by officers somewhere in its "West Coast and Yukon District."

CBSA would not tell CTV News specifically where in that district the items were seized, including in which province or territory, and while the news release was not issued until July 15, the seizure allegedly took place nearly two months earlier.

It appears the border crossing was on land, based on the seizure of the travellers' vehicle.

According to CBSA, the U.S. residents were "seeking entry to transit through Canada," suggesting they may have been heading to or from Alaska, but officials have not confirmed that detail.

For undisclosed reasons, the men were referred for secondary examination, CBSA said. The agency said it was during this search that eight undeclared firearms were uncovered, one of which was prohibited.

Among the more unusual items, CBSA said they found several animal products, many of which are protected by the Convention on International Trade in Endangered Species of Wild Fauna and Flora, which falls under federal wildlife trade law.

The men had with them three bobcat skins, two sheep horns, one bear paw, one turkey talon and one bear skull, CBSA said.

Additionally, it is alleged they had seven pieces of whale baleen, two seal-skin hats and one walrus skull.

According to the agency, the animal products were seized by Environment and Climate Change Canada, and the traveller who claimed ownership of the goods was given two penalties with a $1,200 fine.

That person, who has been identified only as male, was also issued an $8,500 penalty by CBSA for the release of his vehicle.