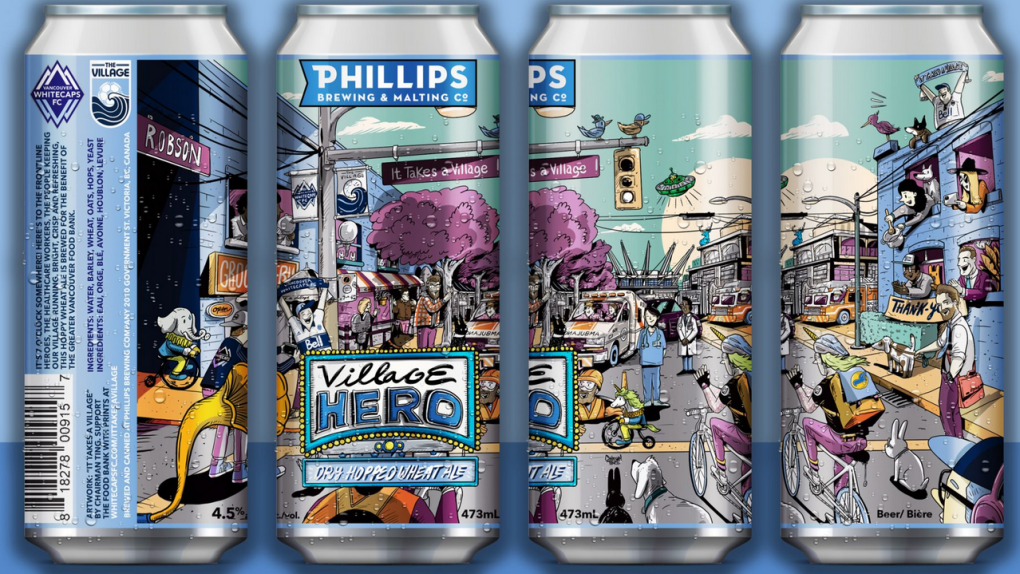 VANCOUVER -- The Vancouver Whitecaps have unveiled a new craft beer designed to honour frontline workers during the COVID-19 pandemic and support the local food bank.

Village Hero was created in collaboration with the team's official beer partner, Phillips Brewing & Malting Co., and is available at dozens of private liquor stores across the Lower Mainland.

"It has all the hops and flavour of an IPA but all the lightness and drinkability of a blonde ale or an American wheat ale," Phillips said in a statement. "Cheers to the frontline heroes working to keep us safe."

For the label artwork, the Whitecaps and Philips used It Takes A Village, a piece the team commissioned from local artist Carson Ting that depicts the nightly 7 p.m. cheer for frontline workers.

Prints of the piece have been selling on the Whitecaps website since May 1, and have already raised more than $128,000 for the Greater Vancouver Food Bank.

The team said 100 per cent of the proceeds from the Village Hero beer will be going to the food bank as well.

Earlier in the pandemic, Phillips also pivoted to producing hand sanitizer for hospitals and other locations in need, transporting the supplies in beer kegs.

Village Hero is being sold at the following stores: