Vigilance the watchword for pot users, investors at Canada-U.S. border 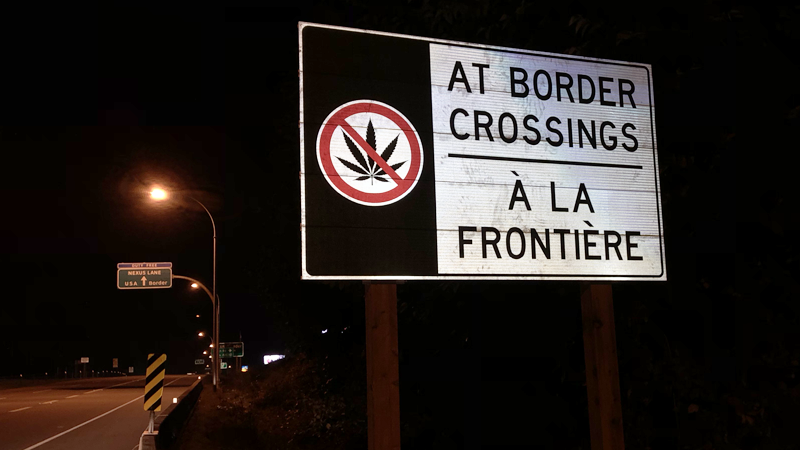 A sign near the Peace Arch Border Crossing reminds drivers not to bring marijuana to the U.S. (Len Saunders)

WASHINGTON - American officials can't yet say for sure if there's been any change in the number of people being turned away at the Canada-U.S. border for using marijuana or working or investing in the legal cannabis industry.

But Customs and Border Protection spokeswoman Stephanie Malin says anecdotally, there has been no significant change in the numbers or in the agency's operations in screening people seeking to enter the United States.

Marin says the agency expects to be able to release more detailed statistics early next month.

Immigration lawyers on both sides of the border, however, are already dealing with cases of people facing a lifetime ban from the U.S. and say the problem is only going to get worse without a change in American federal law.

With cannabis legal in Canada and more U.S. states easing their own restrictions - notably Michigan, home to the busiest northern border crossing on the continent - they warn that a U.S. federal prohibition on pot means Canadians face an escalating risk of problems at the border.

U.S. border authorities say anyone who admits to having used marijuana prior to Oct. 17, the day it became legal in Canada, could be barred from the country, as well as investors and industry employees who try to cross for cannabis-related reasons.

“The bigger issue is people thinking the slate has been wiped clean,” said Henry Chang, a Toronto-based immigration lawyer who has spent the last several months warning Canadians about the dangers.

“I think we're going to start seeing more people getting banned, not because of them smoking marijuana after Oct. 17, but just because they think they have nothing to hide and they blurt out that they smoked marijuana when they were 18.”

Even in the case of legal cannabis use, U.S. law can still keep out anyone deemed to be a drug abuser or addict, or who is diagnosed with a mental disorder with a history of related harmful behaviour - including alcoholism or consuming pot, said Chang.

Customs and Border Protection initially warned that any Canadian who gave off a whiff of pot involvement - from using the drug to working or investing in the industry -risked being banned or denied entry. The agency later softened that stance, saying industry workers would generally be deemed admissible so long as they were travelling for reasons unrelated to their work.

At least one would-be traveller was intercepted last week in Vancouver and is now barred from the U.S., because he wanted to tour a Vegas-based cannabis production facility in which he'd recently become an investor, said Len Saunders, a Canadian lawyer based in Blaine, Wash., who specializes in U.S. immigration law.

“He's kind of shellshocked right now,” Saunders said in an interview. “He said, 'I didn't know anything about this.' I said, 'Haven't you been reading the news?”'

The investor's visit, part of a tour arranged by his financial adviser, happened to coincide with MJBizCon, a major cannabis industry conference that took place last week in Las Vegas. A number of travellers who were bound for that conference found themselves pulled aside for secondary screening.

The man told border officials that he has never used marijuana, was merely an investor and never would have tried to travel had he known the risk, Saunders said. Border authorities had been notified about the Vegas conference and told to be on the lookout, the lawyer added.

Saunders said he has been helping Canadians navigate the border ever since the state of Washington legalized cannabis in 2012, a policy change that touched off a flood of cross-border shoppers that continues to this day, based on the number of B.C. licence plates he sees in the parking lot of U.S. marijuana shops on his way to work.

Chang has some common-sense advice for anyone who might have reason to be anxious entering the U.S.

“Don't dress like a hippie, don't smell like marijuana, because then the questions get asked,” he said.

“If you are asked the question, your only option is to refuse to answer, say it's irrelevant, you refuse to answer. You'll get into trouble, they'll detain you, you'll get sent back to Canada, but at least you don't have anything on the record saying you engaged in controlled-substance use.”