Victim was stabbed in the neck on a Vancouver sidewalk at lunchtime by a stranger: judge 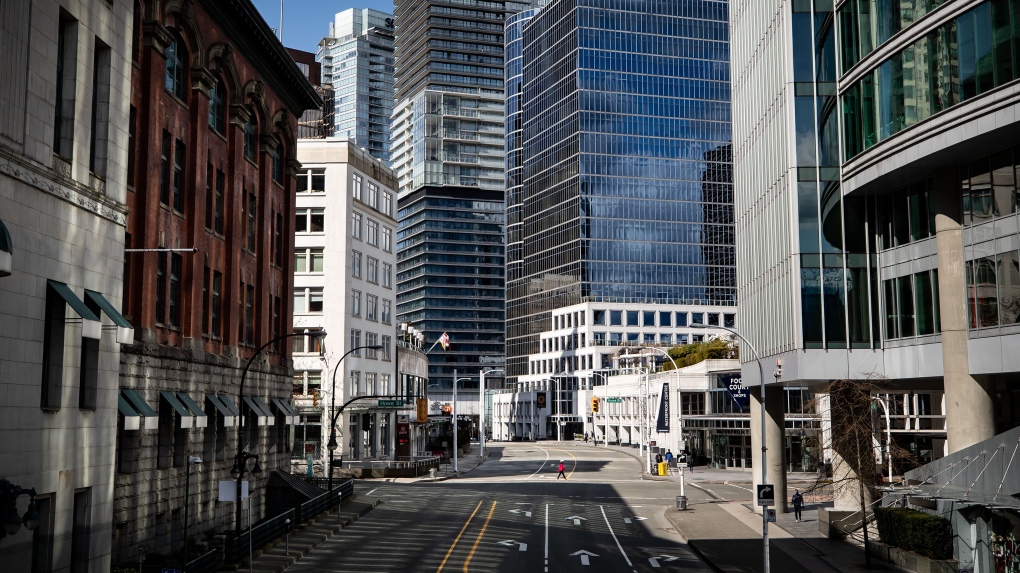 A woman walks across an empty street near the waterfront in downtown Vancouver, on Sunday, March 29, 2020. THE CANADIAN PRESS/Darryl Dyck

A British Columbia man was just 18 when he approached a stranger on a downtown Vancouver sidewalk at lunchtime and stabbed the victim in the neck, a local courtroom heard last week at a sentencing hearing.

George Robinson, now 20, admitted to the stabbing on Dec. 18, 2019. Because there was no trial, details were revealed for the first time in Judge Gregory Rideout's reasons for sentence.

Robinson pleaded guilty to the aggravated assault, which was captured on CCTV camera at noon on Granville Street.

The court heard during the hearing on May 10 that Robinson had been walking on the west sidewalk, and that another man was walking toward him.

According to Rideout's summary, Robinson asked the stranger for his name, and when the stranger didn't respond, and walked past, Robinson turned around and pulled out an object from his pocket, while continuing to question the other man, identified in court documents as Jordan Olsen.

Olsen, who didn't know Robinson and didn't understand the questioning or what Robinson was getting at, did not respond.

Robinson ran off, while Olsen called 911 and was taken to hospital.

The victim needed exploratory surgery to determine the source of a hemorrhage, and required four days of treatment. He was in the hospital over Christmas, and released the day after Boxing Day.

Years after the attack, Olsen told the court through a victim impact statement that he still has nightmares about it.

" I didn’t feel safe in my own city, and I still have paranoid feelings that somebody is after me. I have found less reason to get out of bed in the morning, sometimes I will be there till 3 p.m.," he said.

His attacker was unidentified until the following month, despite the video of the attack and from a taxi Robinson took after the incident, until someone sent an anonymous tip through Crime Stoppers the next month.

Police searched Robinson's home in March 2020, and said they found a pistol and ammunition inside a safe, as well as a knife, "a half dozen cellphones" and other items seized by officers.

When determining a sentence for the accused, who confessed to the assault while talking to an undercover police officer in his jail cell then later pleaded guilty, the judge took into account his personal circumstances.

The court heard Robinson's father was an alcoholic, and that he'd struggled with learning disabilities while in school. He started using cannabis at age 14 and escalated to benzodiazepine and OxyContin by age 15.

"At the time of the assault on Olsen, he was 'heavily entrenched in drug use and his intoxication led to an unprecedented amount of paranoia,'" the judge wrote, citing a report that was not posted online.

Psychological reports showed a history of concussions and a potential for life-threatening violence in his future, but also noted he'd participated in a substance abuse program since the time of the assault.

He had no criminal record and accepted responsibility by pleading guilty, but the assault was a random act of violence and he had weapons at home.

Rideout decided, ultimately, to sentence Robinson to 30 months behind bars – a year for the assault and 18 months for the possession of a firearm.

Recognizing his attempts at rehabilitation, the judge said he'd recommend the sentences be served at a minimum/medium-security federal facility, and that be sent somewhere that would allow for one-on-one counselling for mental health and substance use.

He'll also have to give authorities a DNA sample that will stay in a database, and is subject to a lifetime weapons ban.