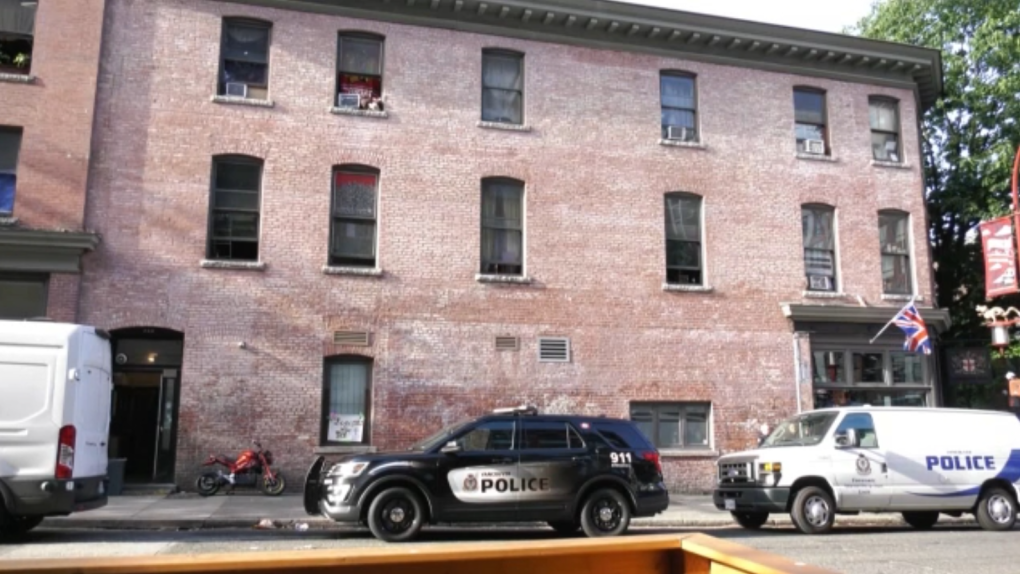 Vancouver police vehicles were parked outside the London Hotel on Main Street on July 20, 2021. (CTV)
Vancouver -

Police have shared the identity of Vancouver's 11th homicide victim of 2021.

The Vancouver Police Department said in a news release Thursday that the man shot and killed inside the London Hotel around 5 a.m. on July 20 was 40-year-old Michael Bailey.

Police said they believe the shooting at the hotel on Main Street at East Georgia Street in Vancouver's Chinatown neighbourhood was targeted.

Two suspects fled the area before officers arrived at the scene, police said.

Anyone with information on Bailey's homicide should call the VPD's Major Crime Section at 604-717-2500, police said. Tips can also be provided anonymously via Crime Stoppers at 800-222-8477.

A shooter attacked a grocery store in an upscale Tennessee suburb on Thursday afternoon, killing one person and wounding 12 others before the shooter was subsequently found dead of an apparent self-inflicted gunshot wound at the store, authorities said.

Canada jumps up list of billionaire countries in new report

Canada added seven billionaires in 2020, increasing its total to 53, tied for 12th-most in the world with Brazil, according to a new global report.

Anti-vaxxers in Quebec could be fined up to $12,000 for protesting near schools, hospitals

Anti-vax protesters who picket outside hospitals, schools, daycares or COVID-19 test and vaccine sites could face a heavy fine, according to a bill tabled Thursday by the Quebec government.