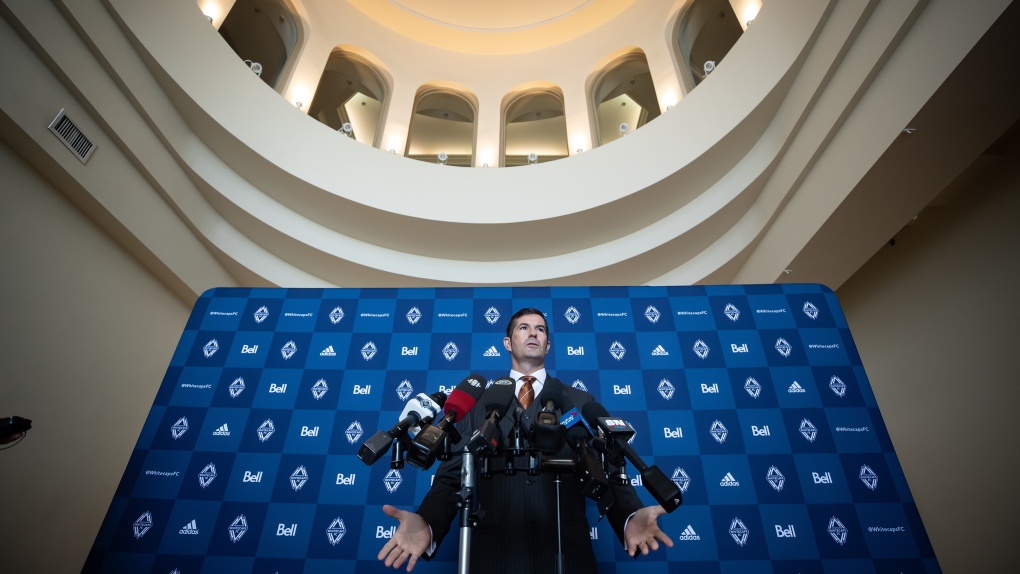 Vancouver Whitecaps CEO Mark Pannes speaks during a news conference after Major League Soccer announced the suspension of the season due to concerns about the coronavirus, in Vancouver, on Thursday, March 12, 2020. (Darryl Dyck / THE CANADIAN PRESS)

VANCOUVER -- The Vancouver Whitecaps made changes at the top Tuesday, showing CEO Mark Pannes the door after less than six months on the job and entrusting the MLS club to sporting director Axel Schuster.

Schuster, now fully in charge as CEO and sporting director, will report directly to co-owner and executive chair Jeff Mallett and the ownership group.

The club explained the changes by saying it was “streamlining” its senior leadership.

“One voice, one team, one dream and Axel's our guy,” Mallett told a media conference call.

“Mark was a great contributor - of certain things. Axel is the best CEO,” he added.

Mallett denied the move was a cost-cutting decision, while acknowledging the club was losing “tens of millions of dollars” because of the pandemic.

Pannes only came on board in January, touted by the club as a “global sports industry leader.” His resume included time with Italy's AS Roma, the New York Knicks and HSBC Private Bank in London.

He proved to be an enthusiastic voice for the club, especially during the global pandemic.

The Whitecaps drew kudos for helping the financially challenged Vancouver Aquarium through the sale of face masks and raised funds for the Greater Vancouver Food Bank, partnering with a local artist to sell a piece of art commemorating Vancouver's daily evening salute to health-care workers, first responders and other front-line workers.

“Mark did bring things, but only inside the walls do we know how decision are made, how cultures are set, what goes on,” Mallett said.

“This is when you need to be strong and not popular, from an inside standpoint,” he added. “There's just no question in my mind that we have the right person and we're making the right decision.”

Stability has been lacking in recent times at the club.

Whitecaps icon Bob Lenarduzzi was shifted from president to club liaison last August as the club struggled on the field and reeled from a decade-old abuse scandal with a Whitecaps women's team.

Schuster was hired as sporting director last November, charged with the club's technical direction. Previously, in his native Germany, he spent three years as director of professional football at FC Schalke and more than 16 years as head of football operations at FSV Mainz 05.

Schuster said he had no concerns about the breadth of his new job.

“I'm the total opposite,” he said. “I'm pretty confident that we've got a good group together in our culture, with our tactics, to make this franchise successful on and off the pitch.”

The Whitecaps have missed the playoffs the last two seasons, compiling a 21-29-18 record.

This report by The Canadian Press was first published June 16, 2020.