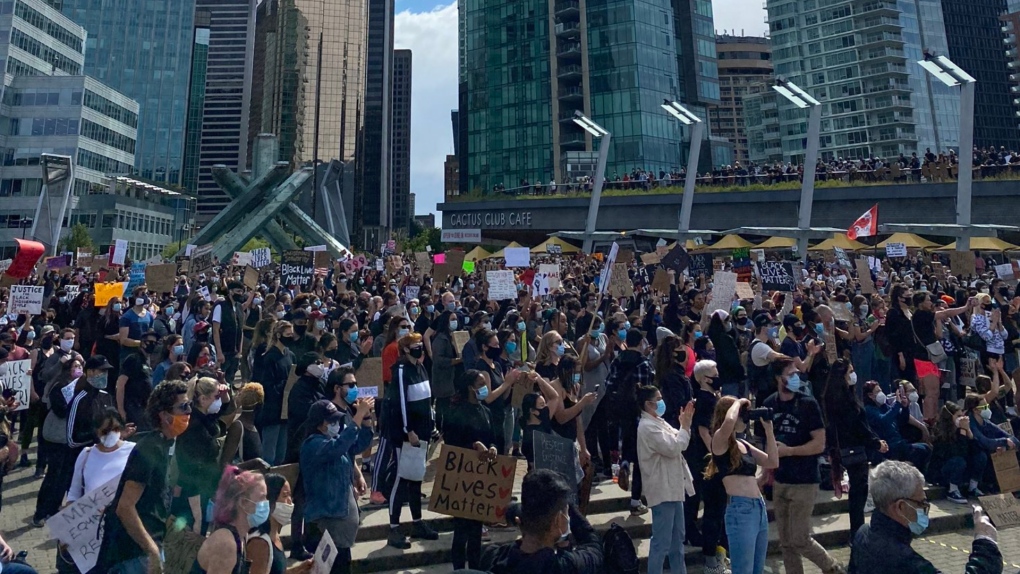 Thousands of people gather in Jack Poole Plaza in downtown Vancouver for an anti-racism rally on Friday, June 5, 2020.

VANCOUVER -- The next anti-racism rally in Vancouver will be a march, organizers say.

The event will start at Jack Poole Plaza at 4 p.m. on June 19, a date chosen intentionally as it commemorates the end of slavery in the U.S.

"It was important for us to have a march because we had a lot of people from the community voice that opinion, and for us, it's all about the community coming together and all of our voices being heard," said Nova Stevens, one of the march organizers. "We find that a march is powerful. It shows solidarity."

Protesters are expected to walk on Thurlow Street before turning on to Beach Avenue towards Sunset Beach. Two previous anti-racism rallies held in the city were stationary events where protesters gathered at the Vancouver Art Gallery and Jack Poole Plaza to listen to speakers.

"It's empowering to be able to march as our ancestors did and do it peacefully," said march co-organizer Shamika Mitchell. "The march is a place to be heard…it's about unity."

Mitchell says she hopes the event will be an opportunity to "teach with love" and have people get involved in the movement beyond making posts on social media.

"I've honestly been so touched by how many people have reached out and asked and said, 'Are you OK, how is your mental health?' and show their support," she said. "Not just by making a post or posting a black square. Genuinely showing love and support. This march is not to provoke anger. It's very peaceful…we want you to leave there feeling like, OK, I've learned something today."​

Stevens says they are not working alongside Vancouver police but they have made them aware of the event.

"We do have our own security that will be attending the event," she said. "These are trained security guards that…have the knowledge and experience to handle crowds of that capacity. For us, safety is paramount, so we do want to make sure we have our crowds controlled and their safety and their security if things were to go awry."

Vancouver police say they are aware of the upcoming event and have a plan in place "should anything arise."

"Public safety is always undoubtedly our top priority," police said in an emailed statement. "Police will be on scene that day to ensure that continues to be met."

Two people were arrested for assault by Vancouver police at the anti-racism rally on June 5, though officers described them as instigators who got involved in the protest and were not representative of the otherwise peaceful demonstration.

Organizers say they've heard from people in communities such as Whistler, Squamish and Kelowna who plan to attend the march and are potentially expecting double the turnout of past events. Thousands of protesters turned out at the two previous anti-racism rallies, and health officials encouraged attendees to monitor themselves for COVID-19 symptoms for 14 days.

Stevens and Mitchell say there will be first aid volunteers on scene wearing red, some of whom will be able to take protesters' temperatures, and they will be encouraging people to wear masks and physically distance throughout the event. They will also be posting health and safety guidelines to their social media accounts.

"We chose Sunset Beach for that purpose so that we could have that many people in the space and socially distance," Mitchell said, adding there would be an LED screen at the beach displaying reminders about physical distancing. "We've also made posts if you feel sick or have symptoms to stay home."

Provincial health officer Dr. Bonnie Henry has previously stressed that peaceful demonstration is an important right for British Columbians and urged anyone participating in future protests to wear a mask and physically distance.

When asked last Tuesday about the demonstrations, Henry emphasized public health guidelines to stop the spread of the coronavirus are still in place and urged those hoping to making a difference to do so in smaller groups.

"I am disappointed because I know there are very effective ways for small groups of people to demonstrate these important issues and do it peacefully, and to do it safely," Henry said Tuesday.

She encouraged people to find other ways to protest that did not involve crowded spaces.

"But we are watching carefully, and I will say again, find small, impactful ways where you can stay separate from each other, where you can have your voice heard in a way that's safe, particularly for those people who are more likely to be disadvantaged by this pandemic," she said.

This article has been corrected to say that organizers have notified police, but do not have any plans to work with them.