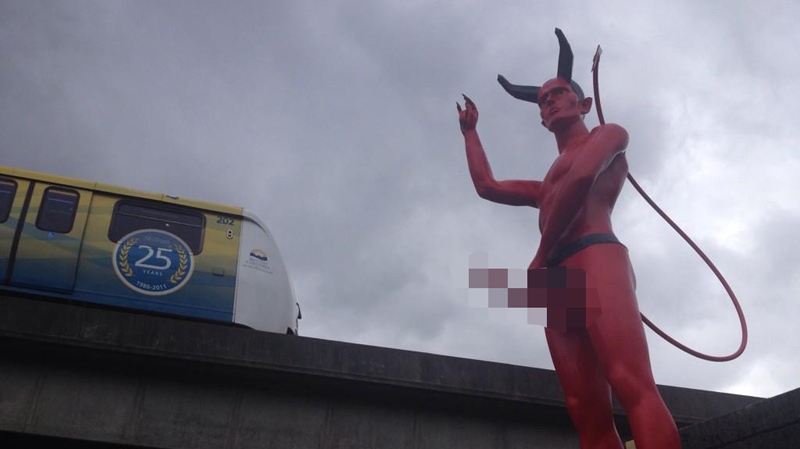 A racy statue of the devil sprang up near the Clark Drive SkyTrain station overnight, and nobody seems to know how or why it got there. Sept. 9, 2014. (CTV)

Though it was erect for less than 24 hours in 2014, the lewd statue known as Penis Satan has remained a beloved part of Vancouver lore.

Standing more than eight feet tall with the help of the pedestal on which it was placed, Penis Satan greeted passing SkyTrain riders at the intersection of Clark Drive and East 4th Avenue with one hand in the air and the other near its substantial erection.

City workers quickly removed the statue, but not before it spawned imitators and admirers and prompted conversations about the nature of public art in the city.

Now, the self-described "guerilla street artist" known as "Obsidian" – who claims responsibility for the original work – has created an augmented reality version of it.

Anyone who's so inclined can visit the statue's website to "summon" Penis Satan to pose in their photos and videos. Users don't have to download an app. The digital statue is accessed through a browser.

Asked why he chose to make an augmented reality version of the piece, Obsidian told CTV News it fits with what "needed to be done" for Penis Satan's future. He's also selling NFTs inspired by the statue.

The artist said his initial expectation for the work, which was placed anonymously and without permission from the city, was that it might get a little bit of local media coverage. He said it ended up becoming much more of a phenomenon than he initially expected, and he's proud that the statue still has admirers nearly eight years later.

Obsidian told CTV News he never attempted to recover the original artwork from the city. The digital versions are all that remains.

As of Wednesday, about 500 people had used the augmented reality version of Penis Satan since it launched on May 1, Obsidian said.

He was pleased with that number, but said he also feels like he's playing "catch up" with his audience. He wasn't on social media when the statue went up, and he only recently joined Twitter and Instagram to promote his work. A Facebook group dedicated to Penis Satan is not in his control.

"It's slow going, because I don't know who the initial fans were who connected with it because I didn't have any social media up until now," he said. "So, it's a bit slow, but I feel like every day there's new momentum, there's more and more people aware of the digital side of Penis Satan."

"It's nice to finally, as the artist, give Penis Satan a voice," he added.