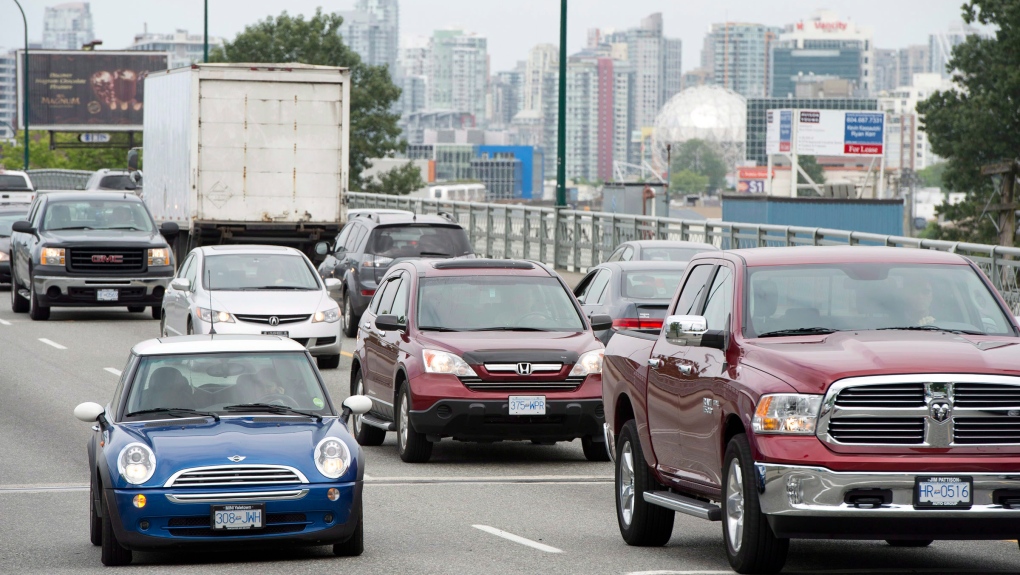 VANCOUVER -- Motorists would have to pay a fee to drive into Vancouver's downtown core under a plan to slow climate change, but one expert says while city council's goals are laudable, they could also lead to financial hardship for some.

Green Coun. Pete Fry said in a social media post that the plan is part of a drive to make Vancouver one of the greenest cities in the world, adding a lot of work lies ahead to address issues related to equity.

The plan also includes promises to construct and renovate buildings to reduce emissions as well as a carbon surcharge on new gas and diesel vehicles at the higher end of the market.

Almost 40 per cent of Vancouver's carbon pollution comes from vehicles. About 30 per cent comes from natural gas heating.

Details of the Climate Emergency Action Plan have yet to be finalized but it includes drivers paying a toll coming into downtown. Fees would be higher during rush hour and fall as far as zero at other times.

Todd Litman, an analyst at the Victoria Transport Policy Institute who contributed to the plan, said it aims to discourage car use. People need to look past the toll and focus on the benefits, he added.

“Most people can't imagine they could be better off living a less automobile-dependent lifestyle, even though when people actually experience it, they prefer it,” Litman said in an interview.

In 1900, before cars became common, a typical household spent an insignificant amount on transportation, he said. Now, the average household spends almost 20 per cent of its budget on motor vehicles.

The plan aligns with findings from the United Nations Intergovernmental Panel on Climate Change to limit global warming to 1.5 C to reduce carbon pollution by 50 per cent by 2030.

Andy Yan, director of the City Program at Simon Fraser University, described the plan as the “first 10 steps in a journey of 10,000.”

The policies are inspired by similar plans implemented in London, Stockholm and Singapore, he said. No other Canadian city has anything similar although a number of them including Victoria, Halifax, Toronto, Edmonton and Montreal have taken several smaller steps to cut emissions.

“I think one of the big challenges is that we are neither Singapore, Stockholm or London,” Yan said.

He acknowledged that Vancouver is different from those other large cities, especially in terms of their economies and house prices.

“That is one of the limiting factors of really taking in those examples and trying to transplant them into Vancouver.”

As an example, Yan said Singapore has affordable housing along with a robust public transportation network. Public transit in those cities also creates an alternative to commuting in private cars, he said.

It's important to recognize how high prices in Vancouver have pushed low-income earners out of the downtown, forcing them into longer commutes, he said. About 45 per cent of those working in the city live in the outer suburbs.

He warned that the congestion charge could become a “sizable burden” for some.

While it is commendable that the local government wants to acknowledge Vancouver is facing a climate emergency, it also needs to address inequality in housing and income, he said.

Lower walking or bicycling rates among those in racialized or immigrant groups could indicate disparities in length of commute, workplace facilities and other factors, it found.

Yan said people who are employed in contract jobs, the service industry, health care and other essential work might not be able to cycle or walk and they could be disproportionately affected by the plan.

The strategy would take effect after 2025. Public consultations will take place over the next 18 months.

While London has introduced cycling lanes, expanded train hours, and a steep levy for even short car trips into the core, Wolmar said the plan hasn't developed much.

His advice to Vancouver is to “sow the seeds” of the plan quickly, put it into action and build on it.

Continued spending on buses and trains will be needed as well, as London has done, with subsidized fares being fundamental to the plan's success, he added.

“You need somebody with courage to implement it.”

Vancouver is expanding its transit network with the city's Broadway subway line being one step closer after the announcement of a design and construction contract for the project in September. Work is scheduled to begin this fall with the line slated to be in service in 2025.

Litman said a fee for bringing cars downtown would encourage the use of public transit or walking. Revenue raised could go to improving walking, cycling and transit infrastructure.

The government needs to persuade those with cars to drive only when they need to, he said.

“We're not saying you should never drive,” he said. “The (plan) is really built on that idea that if you really do need to drive downtown, fine, but you're gonna have to pay $10 or $15 for the privilege.”

Yan said while financial deterrents modify behaviours, policy makers are “showing up with only sticks” and without alternatives.

“You're trying to deal with climate change in a world of inequality and that's in no way easy,” he said. “There are limits to where people are able to bike and walk.”

This report by The Canadian Press was first published Nov. 21, 2020.