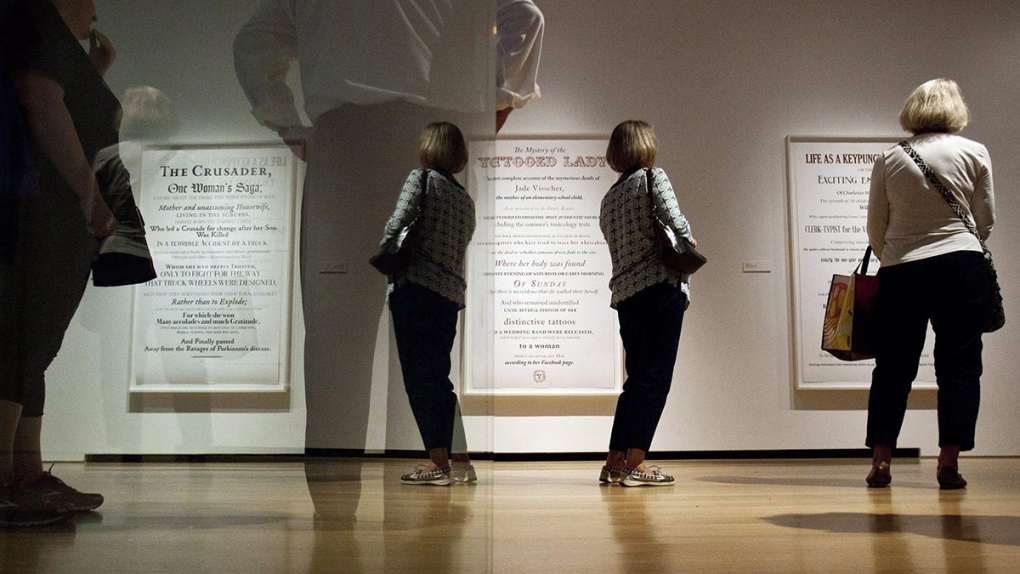 ArtPrize-goers are reflected in glass as they look at Kenneth Lum's entry, 'Three Women: the Crusader, the Tattooed Lady and the Keypunch Operator,' at the Grand Rapids, Mich., Art Museum on Wednesday, Sept. 21, 2016. (Cory Morse / The Grand Rapids Press-M-Live via AP)

TORONTO -- Vancouver-bred contemporary artist Kenneth Lum, whose works have challenged notions of identity in galleries and public spaces across the globe, is among this year's winners of the Governor General's Awards in Visual and Media Arts.

The Canada Council for the Arts revealed the eight honourees Wednesday who will each receive a $25,000 prize for their contributions to Canadian creativity.

Lum, who currently serves as the chair of fine arts at the University of Pennsylvania's School of Design in Philadelphia, was hailed as a "living national treasure" in his citation for the Lifetime Artistic Achievement Award.

His media-spanning body of work "continues to truly reshape the imagination of people in Canada as an uncomfortable nation, fractured by historical trauma and made up of diverse peoples," the citation read.

From photography to performance art to public installations, Lum said his Canadian perspective has informed his three-decade-long career as he grapples with themes of how individuals navigate a complex world.

"Canadians are modest, by and large, in the context of our role in the world," Lum, 63, said by phone from Philadelphia. "I think it's a cliche in a way to say that we're mediators of the world, but it's also not untrue."

Lum said his impoverished upbringing has set him apart in an art scene dominated by upper-class creatives.

Raised in East Vancouver by Chinese-Canadian parents, Lum said he always had an aptitude for the arts, but didn't consider it as a career when he enrolled in Simon Fraser University in Burnaby, B.C., to study chemistry.

"My mother worked in a sweatshop. We were evicted twice when I was a little kid," he said. "There's no way that context lends itself to, 'I think I'll be an artist."'

That changed when Lum enrolled in art classes taught by Jeff Wall and Ian Wallace, who unofficially inducted him into the so-called "Vancouver School" of photo-conceptualism in the early 1980s.

Lum's early career was marked by a fixation on how pop-culture fit into cloistered conceptions of "art."

In his photo-text works, Lum often applied the motifs of commercial advertising to everyday images, such as his 1989 "Portrait-Logo" series that juxtaposed generic portraits of families or individuals against stylized lettering that evoked corporate logos.

He's brought his artistic vision into the public square with commissions that often confront the complications of how a city commemorates its history.

For example, Lum created a memorial to the Canadian war effort in Italy during the Second World War in Toronto's Nathan Phillips Square that shows the town of Ortona in ruins with four soldiers flanking each corner.

In 2010, Lum created a 57-foot monument that lights up his home neighbourhood at night with the words "East Van" arranged in a cross.

Over the years, Lum said he's seen East Vancouver change in ways he has mixed feelings about.

"My work has always been occupied with that content, and it's never gone away. In fact, in many ways, it's become more relevant."

The Governor General's Award adds to Lum's long list of accolades, including a Guggenheim Fellowship, the Art Gallery of Ontario's Gershon Iskowitz Prize and being appointed as an Officer of the Order of Canada.

An awards ceremony will be held in Edmonton on July 3, and the winners' works will be displayed at the Art Gallery of Alberta through the summer.

This report by The Canadian Press was first published Feb. 19, 2020.