Vancouver musician and mom disfigured in attack on Granville Street

VANCOUVER -- A musician and mom wants justice after she says her face was slashed in an unprovoked and apparently racist attack on Vancouver's Granville Strip.

Michelle Heyoka, 26, got 40 stitches to close a wound that stretches from the tip of her nose to millimetres away from her right eye — a scar that could be there for life.

"The doctor said if it was one centimetre higher I could have lost my eye," Heyoka told CTV News.

"I'll have a scar in the middle of my face for the rest of my life. To have it on my face and look in the mirror every day and know how this happened: by getting sliced in the face. It's very traumatizing," she said.

Vancouver police say they are investigating what they called a "fight" and are looking for the public's help in solving the case, as well as looking for surveillance and dash cam video.

But the force couldn't explain why the crime — one involving a disfiguring attack on a woman, in a public place, allegedly involving a racist element — didn't result in a public warning.

"This is an ongoing investigation," said Sgt. Aaron Roed. "We use public appeals sparingly. We don't want to cause a panic."

Heyoka told CTV News she was busking on Granville and Nelson on the morning of July 19. A video shows her singing "If I Ain't Got You" by Alicia Keys.

But by 4 a.m., as she was packing up and leaving with several friends, she says a group of men yelled racial slurs, and charged.

"They called me a 'chug,'" she said, referring to a derogatory term for Indigenous people. "My friend is African American. They called him the N-word before stabbing us.

"They charged towards us. One was going for (another) friend. I don't know why. His fist was up and he was going to punch her. I screamed, 'Don't touch her.' Instead of punching her, he punched me. He had a blade in his fist," she said.

Cellphone video shows the aftermath: Heyoka is bleeding heavily from her face, and one of her friends had been stabbed several times in the torso. A video Heyoka took in the ambulance shows her friend writhing in pain.

Police officers can be seen in one video; B.C. Emergency Health Services records say police called an ambulance at 4:11 a.m. that morning near Granville and Nelson streets. The first crew was on scene in 10 minutes, at 4:23 a.m. A second crew arrived at 4:25 a.m., and a third ambulance was also dispatched to the scene.

Heyoka said while waiting for paramedics, a bystander gave her a clue: two men's names. She said she tracked them down on social media, gave the names to investigators, but when an officer came to see her last week, he said the names didn't amount to much.

She said the officer told her, "Unless we have evidence linking the people to the crime scene, there's not a lot we can do."

Heyoka said she is hoping that someone will come forward and help track her attackers down.

"I got stabbed in the face. I could have lost an eye. My friend got stabbed four times in the back. We didn't do anything. It was random. Try to comprehend that. It blows my mind," she said.

Heyoka hasn't explained the scar to her two kids, aged 3 and 5 — she can barely explain it to herself.

Plastic surgery, a technique that can disguise scars, isn't covered under B.C.'s medical services plan (MSP) unless it's "medically necessary." One of her friends has started a GoFundMe online fundraiser to pay for it.

Heyoka, who has released a single called "Pull Up" and recently released another called "Psycho," says she will keep singing and hopes that her career isn't negatively affected by her scar.

And she hopes the two men are arrested so that partiers who visit Granville Street aren't at risk.

"It happened in a matter of seconds. We both could have lost our lives. I'm lucky to still be alive," she said. 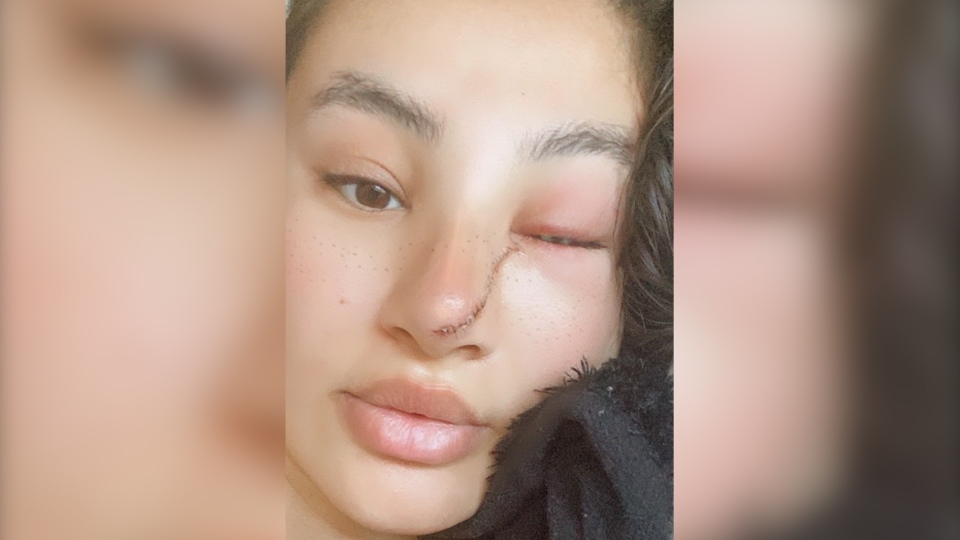