Vancouver housing dilemma: Is it better to rent or buy? 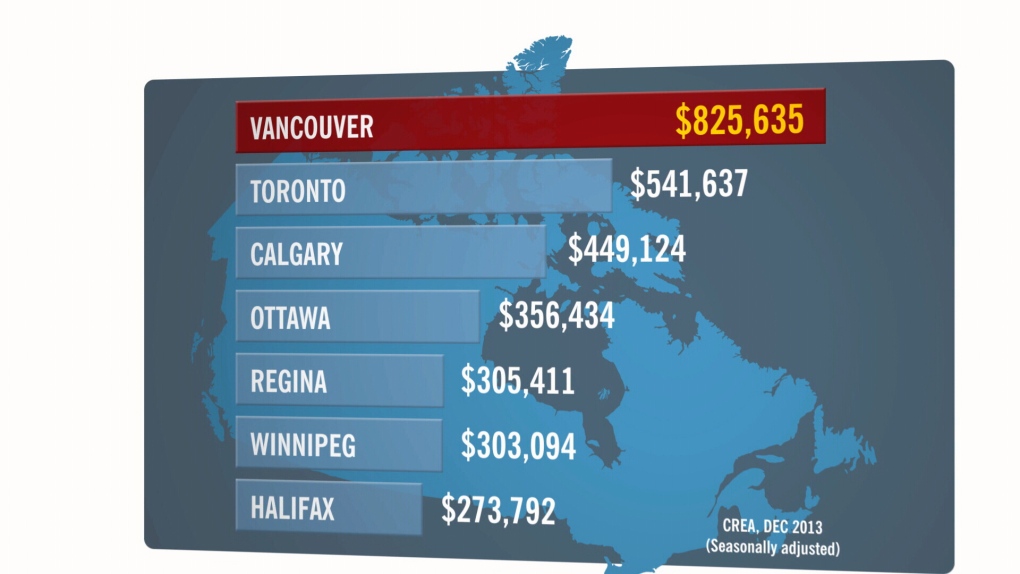 Vancouver is one of the most beautiful cities in the world, but that global cachet has ratcheted up housing prices to levels that have made it impossible for many Vancouverites to get into the real estate market.

According to seasonally adjusted data from the Canadian Real Estate Association, the average price of a home in Halifax is $273,792. That number jumps to $541,637 in Toronto and a whopping $825,635 in Vancouver.

"The question I have is how can we sustain a market when it's so expensive to get into it? The pool of people who can comfortably afford to buy a house has to be shrinking," he said.

Carrick says on average house prices have risen 5.5 per cent each year for the past 17 years. If that carries on for the next decade, the average price of a home in Vancouver would rise to $1.3 million by 2024.

"We're going to have to invent some new ideas here, because if we keep going on the way we are, the idea of home ownership is going to become something for elites, for people who have higher incomes. It’s going to be something for the one per cent, not the 99 per cent," said Carrick.

Kerry and Jordan Titchener are expecting their first child in April and are already pre-approved for a mortgage. But after three months of searching for a new home, they're not convinced buying is the answer anymore.

"We want to just rent again because seeing what we're going to have to pay for management fees, strata fees, property taxes. We just feel why put that stress on our relationship," said Jordan Titchener.

A recent RBC affordability study found that if couples, like Kerry and Jordan, want to purchase a detached bungalow in Vancouver, they'd need to spend 91 per cent of their disposable income on housing.

The buy vs. rent debate continues Tuesday on CTV News. Consumer reporter Lynda Steele talks to a real estate mogul who says if you’ve got a job and some savings, get into the market now and an economist who says sell your home and use the equity to invest instead.

Have your say:  Should you rent or buy given Vancouver’s red-hot real estate market?