Vancouver has spent almost $1M on Oppenheimer Park this year

VANCOUVER - The City of Vancouver spent nearly a million dollars on Oppenheimer Park from January through August of this year as it dealt with issues surrounding its latest homeless encampment, according to numbers obtained by CTV News.

The figures, which were provided by Coun. Melissa De Genova, show the city spent just over $934,000 on various expenses to do with the park over that period. That amounts to a small fraction of one per cent of Vancouver's annual operating budget of $1.51 billion.

The costs include $222,000 on policing resources and $240,000 on fire department resources, which were incurred from Jan. 1 to July 31 alone. Another $355,000 was spent on park ranger visits, cleanup, porta-potty maintenance and outreach over the same period.

The city then racked up an additional $117,000 from various departments over five days in August, when the park board issued an order to remove all structures from the park.

The figures don't include regular police or firefighter patrols, or any costs incurred by the local health authority or BC Ambulance Service. De Genova said the costs are "above and beyond" the normal funding budgeted for regular park operations.

The councillor told CTV News she supports calls from Mayor Kennedy Stewart and the Vancouver Police Department to seek an injunction to clear out the park, and expressed concerns about how the ongoing issues will impact the city's budget.

"There is no contingency fund left," De Genova said. "There is no built-in budget for an encampment … as we look toward the 2020 budget, council will have some very hard decisions to make."

The mayor and police have focussed their concerns largely on safety issues at the park and surrounding areas. Earlier this week, police said about half of the 453 guns that officers have seized in the city so far this year came from the district that contains Oppenheimer and the Downtown Eastside.

But Oppenheimer is under the jurisdiction of the park board, which has been reluctant to take a heavy-handed approach to dealing with the homeless people who have been living there for many months.

The board has scheduled a special meeting for Thursday night to address how the ongoing problems should be dealt with.

Board chair Stuart Mackinnon has indicated there will be modular housing units opening up in February where the campers could be placed, and pushed for the city to figure out a temporary solution that can be implemented in the meantime.

De Genova noted that back in August, when the board issued its order to clear out the park, BC Housing arranged housing for about 120 park residents. Some people declined to leave, she said, and more people have moved into the encampment since.

"I did check with our staff and at one point everyone was offered a home," said De Genova, who was acting mayor at the time. 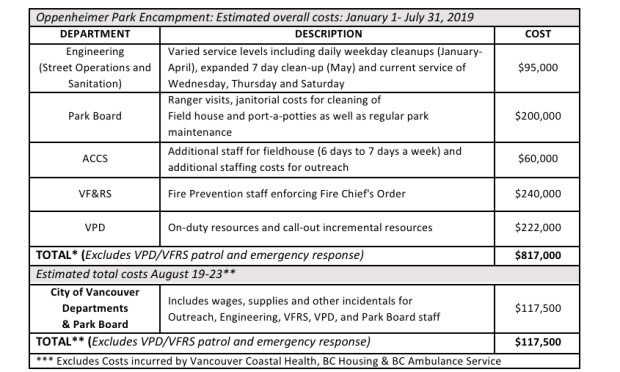