Its borders stretch from the Fraser River nearly all the way to False Creek, bringing together neighbourhoods like Marpole, Shaughnessy, South Granville, and Fairview.

Jody Wilson-Raybould captured the Vancouver Granville riding twice: first as a Liberal in 2015 with nearly 44 per cent of the vote, then as an independent in 2019 with nearly 33 per cent.

In 2019, Liberal candidate Taleeb Noormohamed came in second with 26.6 per cent, Conservative Zach Segal third at 22.9 per cent, and the NDP’s Yvonne Hanson fourth with 13.1 per cent.

Now, Wilson-Raybould isn’t running again, putting Noormohamed, a tech executive, in a match up against new challengers: the Conservatives’ Kailin Che, a lawyer, and the NDP’s Anjali Appadurai, a self-described climate activist.

Damian Jewett, a tech consultant and software engineer, is also running as a candidate for the People’s Party of Canada.

And the Green Party is running Imtiaz Popat, a therapeutic counsellor who describes himself as an ecological and social justice advocate.

The Green Party and the People’s Party of Canada candidates received 5.1 per cent of the vote and 0.8 per cent, respectively, in the 2019 election.

Since CTV News first interviewed the candidates for this story, Noormohamed’s record of local housing purchases and sales has come under scrutiny.

Of those, records show he offloaded 14 within a year of their purchase dates, numbers his campaign does not dispute, and which fit the criteria for an “anti-flipping” home tax proposed by the Liberals, aimed at reducing speculation and improving affordability.

There is no indication any of Noormohamed's purchases or sales violated any laws, regulations or requirements.

After news of the candidates property purchase history came to light, CTV News re-interviewed Noormohamed both for this riding profile and to seek his responses to criticism and questions about his housing purchase and sale history.

He went on to say: “Whether it’s a speculation tax, building more homes, or protecting buyers and renters, or unlocking ownership. Those are things that I stand by and I’m proud to support.”

CTV also asked Noormohamed to respond to criticism from the Conservatives’ Che, who called Noormohamed a “hypocrite” for practices that, if continued in the future, could be subject to Trudeau’s proposed anti-flipping tax.

Noormohamed, in turn, pointed to Che’s own record representing homeowners fighting B.C.’s speculation tax in court, a tax he said he supports.

He also mentioned a website he said Che “ran,” which appears to be trying to crowdfund to expand the fight against the provincial speculation tax.

CTV News reached out to Che’s campaign for a response.

Her campaign manager, Barb Ewens, said that Che did not operate or run the saynottospectax.com site and had not and does not lead the grassroots effort to raise money to oppose the tax.

She noted that Che had been one of several lawyers representing impacted homeowners pro-bono. Ewens wasn’t clear about the status of any particular case.

When CTV asked Noormohamed to respond to Appadurai, who called his property flipping history “predatory,” he said that she should “write to her leader about the substantial gaps in (the NDP) housing strategy.”

When it comes to the remainder of the interview below, all candidates were individually asked the same questions. Their answers have been lightly edited for brevity and clarity. 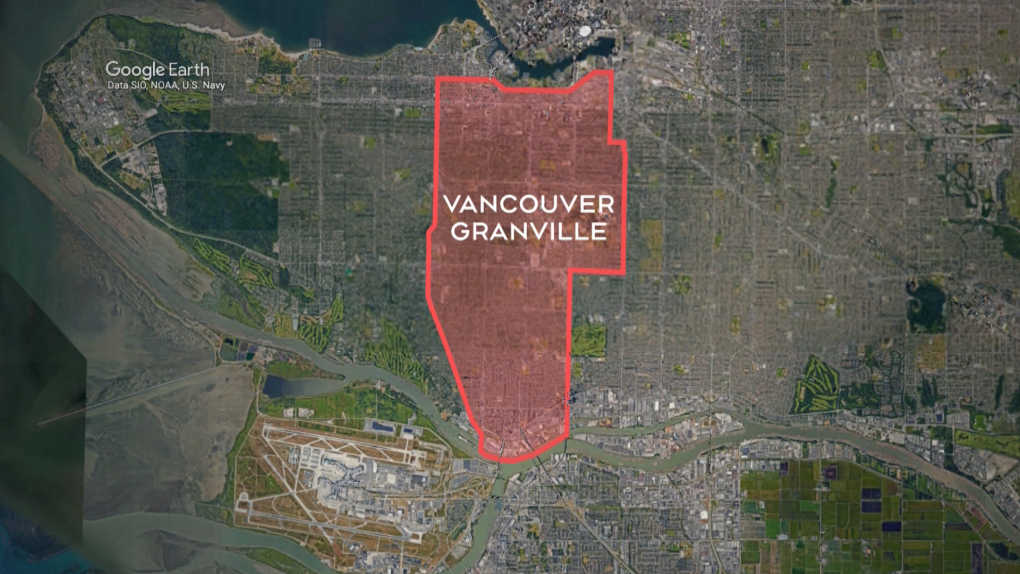 CTV News: How would you describe Vancouver Granville and the people who live here?

Taleeb Noormohamed, Liberal candidate: This riding is in many ways a microcosm of Canada. It’s all kinds of folks from diverse backgrounds, economic, social, cultural, who really want to make sure they have the opportunity for a better life.

Kailin Che, Conservative candidate: It’s a riding where I grew up, where I went to elementary school. It’s a very dynamic and vibrant up-and-coming riding.

Anjali Appadurai, NDP candidate: Incredibly diverse, with a whole range of people from all different walks of life and all different socioeconomic and ethnic backgrounds. It is a riding of people who are very critical and who have a lot of integrity when they vote.

Che: I have experience in all sectors, including law and government and business. I’m a lawyer, a community builder and also a business owner. For the last few years I’ve defended families and seniors and businesses against unfair laws and discriminatory policies.

Appadurai: My commitment to fight for a better and more climate-safe future. That’s in all of our interests. That’s in all of the interests of the next generation, and I know that everyone in this riding cares about that. I’m also doing that from the perspective of creating a strong social safety net to make sure that no one gets left behind in the process.

Appadurai: I would say the two top issues are housing unaffordability and climate change. People are really concerned about spiralling inequality in this country as a whole. It doesn’t matter if you live in a big detached home or if you live in a condo.

Housing is the second most popular issue that folks here talk about. And that’s why I’m proud of the plan that we’ve put forward, which is the most comprehensive, costed plan to address housing affordability.

Let’s remove the regulatory barriers so our builders can build more housing, and so we can convert under-utilized government real estate into affordable housing for working class families.

Or what Erin O’Toole is proposing, which is a Canada where they’re not sure about climate change, where they believe the solution to everything is a tax cut or tax credit.

Che: I think it’s about choices: whether or not we want a government that’s been reckless spending Canadian tax dollars.

Appadurai: This election is about courage. It’s about who’s going to be bold enough to make the systemic change that we actually need right now, that everyone in this riding and everyone in this country, frankly, knows that we need.

Che: I’m committed to working hard to representing Canadians in this riding.

Appadurai: I’m a renter. I’m a young professional, part of a generation that is really seeing the inequities and the failures of our current economic model, sort of laid bare. There’s many others like me who are struggling to make choices about whether to have a family or not, because can we afford our home? Can we afford a place to live that’s stable and long term?

I think there’s a relatability there that I can bring.

Noormohamed: Because I bring together experience in the private sector, and in my volunteer work, and bring those two things together to serve this community and do it in a way that is thoughtful, meaningful, and with a lot of passion.

Appadurai: I think it’s the party that’s in power. This election was called at a very inconvenient and inopportune, and frankly, selfish time.

Noormohamed: I spend most of my time thinking about what matters to the voters here. And so when you ask that question, the thing I think most about is: what would be the biggest challenge to ensuring that the community here is able to move forward? And I think about the very regressive policies that the Conservatives continue to put forward. And I think that’s the biggest challenge the people of Vancouver Granville will face.

Che: I think it’s going to be a very interesting race. Historically, this riding, it’s a new riding that was remapped from a Conservative riding and all the parties have been very, very close.

Che: I grew up in Vancouver, I’ve been around the world. Vancouver is my home and so I’m very proud to be able to be candidate for Vancouver Granville.

Appadurai: Anjali Appadurai is an individual, but she’s also a movement. She is a groundswell of people that have stepped up to politics at a time of great crisis and at a time of the climate emergency. I plan to bring my vision for a climate-just future to Ottawa, where it is sorely, sorely needed for all Canadians.

CTV News: How does Jody Wilson-Raybould’s legacy here impact your campaign, if at all?

Che: Being also a woman who is also in the legal profession, I think she’s very inspirational and I commend her for her courage. We need more of that political courage in Parliament.

Noormohamed: I think it’s important for me to remember that the voters in Vancouver Granville want a voice in Parliament that is going to bring civility, that is going to bring a sense of unity to how we deal with politics. And I want to make sure that the folks that feel that way in this riding, know that they’re getting someone who is committed to working with other people, to listening to other people, to hearing different views, and to being collaborative in finding solutions.

CTV News: Please complete this thought however you’d like. “If elected, I…”

Appadurai: If elected, I will champion in Ottawa, a green new deal for all that tackles the climate crisis with boldness and with courage without leaving anyone behind.

I actually think I’m more green than most Green Party candidates. I believe in a society in which we take care of each other, in which no one is left behind. I believe that’s the purpose of government. I think it’s about fixing the broken system so that we more resilient to climate change

Noormohamed: If elected, I will focus on the things that matter most to the voters in Vancouver Granville: climate change, housing, childcare, and making sure we come out of this pandemic safely, with a strong economic future.

Che: If elected, I will work hard to stand up for British Columbians, to help them increase their housing affordability options, to help restore fiscal sanity in this province.

CTV News: What’s the one thing you want undecided voters to know about you?

Noormohamed: That I work extremely hard, and that I’m prepared to put in every ounce of my effort to move forward on the things that matter to the folks here, and that I will do everything I can to earn their trust and their support.

Che: I want them to know that I’m hard working and I’m a strong advocate. And that I will speak up for what I believe is right.

Appadurai: I want them to know I have their best interests at heart. I believe in a society in which everyone is taken care of. I’m not in this for the politics.