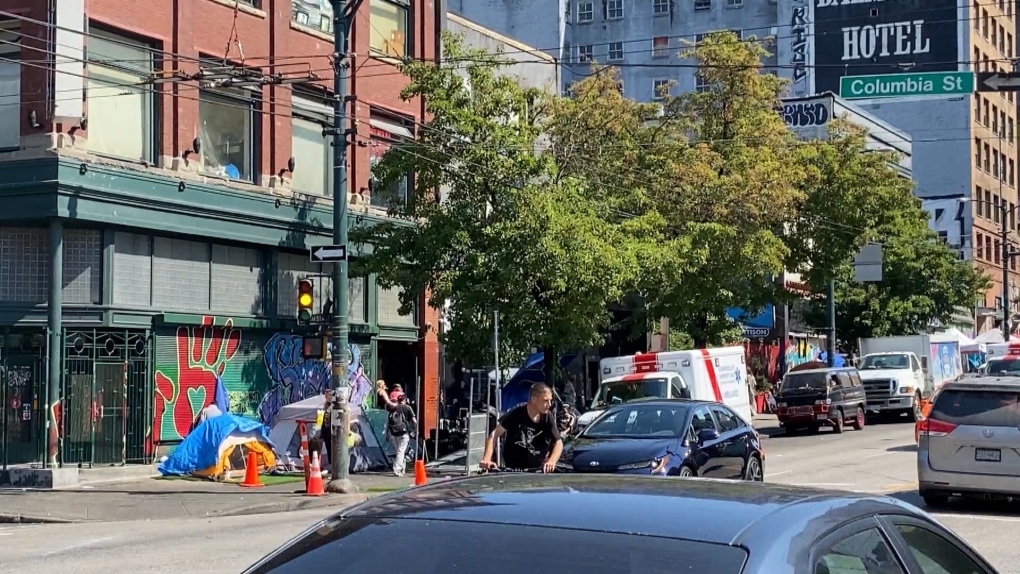 The intersection of Hastings and Columbia streets is seen in this file photo. (CTV)

The City of Vancouver is ending its contract with a Downtown Eastside organization that it hired to help keep streets in the neighbourhood clean.

The city's contract with Vancouver Area Network of Drug Users was scheduled to run for six months from July of this year to January 2023.

The purpose of the agreement, according to the city, was to implement a "Block Stewardship Pilot Program" for the zero through 300 blocks of East Hastings Street.

In a statement, the city said the contract aimed to "explore the potential for such a program to offer support for sidewalk cleanliness and as a potential alternative to requesting (Vancouver Police Department) support for street and traffic bylaw enforcement."

"After an interim assessment of the program, it is evident that VANDU placed emphasis on community development and individual empowerment rather than street cleaning," the statement continued.

"While this has value – and a forthcoming evaluation will provide further information for future consideration – the city requires a focus on cleaning, and as a transition, will engage with other community groups to provide cleaning services."

The contract was worth $320,000. It's unclear how much of that money had been spent through the first four months of the contract.

"In the coming weeks, a (request for proposals) opportunity will be made available to non-profits with capacity and experience working with communities experiencing marginalization to deliver focused cleaning programs," the city said in its statement.

"City crews will continue their daily efforts to clean the streets and remove material from the area."

The city thanked VANDU for "its efforts and work along East Hastings."

"We continue to work in close partnership with a variety of community organizations to balance the needs of those experiencing homelessness while addressing serious life, safety and fire risks in the area," the city said.

The presence of a tent city along the sidewalks of Hastings Street near Main Street has been a source of controversy for months.

In July, Vancouver's fire chief ordered the removal of tents from the sidewalk because of safety concerns, saying a fire in the area would quickly become "catastrophic."

Residents of the encampment have responded with protests and legal action, declaring that they have nowhere else to go.