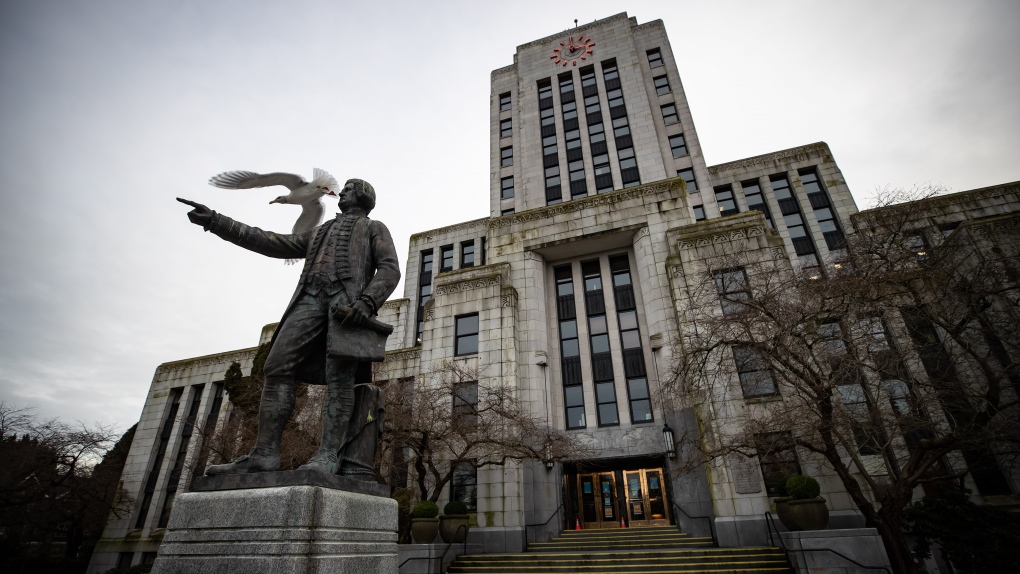 A seagull takes flight off a statue of Captain George Vancouver outside Vancouver City Hall, on Saturday, January 9, 2021. THE CANADIAN PRESS/Darryl Dyck

Coun. Christine Boyle’s proposal would allow city staff to approve non-market housing developments of up to 12 storeys in any neighbourhood, without the need for rezoning or public hearings.

While the motion received unanimous support, an amendment from ABC Coun. Mike Klassen means it won't move forward until staff can research the potential impacts of the proposal.

"I'm delighted that it passed and I think it sends a really important signal to people who are living in unstable housing, people who are struggling to continue to call Vancouver home," Boyle said after the vote.

The councillor stressed that she's grateful for support from the ABC-majority council, noting that a similar motion she introduced last year was defeated.

"The last council didn't even have the courage to move it forward," she added.

Boyle said there has been "strong support" for her proposal from the community housing sector, which has been calling on officials to make it easier to build co-op, mixed-income and non-profit buildings in Vancouver.

After a staff report including the potential impacts is delivered to council, which is expected to happen early next year, council will still have to hold a public hearing as the motion requires a zoning change, Boyle said.

As negotiations continue between premiers and the federal government, former Quebec premier Jean Charest is criticizing the feds' string-attached approach to health-care funding, stating that Ottawa should not be in the business of operating health-care systems.

PM Trudeau presents premiers $196B health-care funding deal, with $46B in new funding over the next decade

A sensor you draw with a pencil could be used for 'smart diapers,' contactless switches and respiratory monitors

We may soon be able to detect humidity levels, respiratory changes or a too-wet diaper, all with a new type of sensor — one created by drawing with a pencil on specially-treated paper.

U.S. President Joe Biden is ready to offer a reassuring assessment of the nation's condition rather than roll out flashy policy proposals as he delivers his second State of the Union address on Tuesday night, seeking to overcome pessimism in the country and concerns about his own leadership.

A 24-year-old man now linked to an unusual string of crimes that kept the Dallas Zoo on the lookout for missing animals told police that after he swiped two monkeys from their enclosure, he took them onto the city's light rail system to make his getaway, court records show.

Balloons and drones among 768 Canadian UFO reports from 2022: researcher

Balloons and drones were among 768 reported UFO sightings in Canada last year, according to Winnipeg-based researcher Chris Rutkowski, who also found that eight per cent of all cases remained unexplained.

Defence attorneys for actor Alec Baldwin are seeking to disqualify the special prosecutor in the case against him stemming from the fatal shooting of a cinematographer on a New Mexico film set.