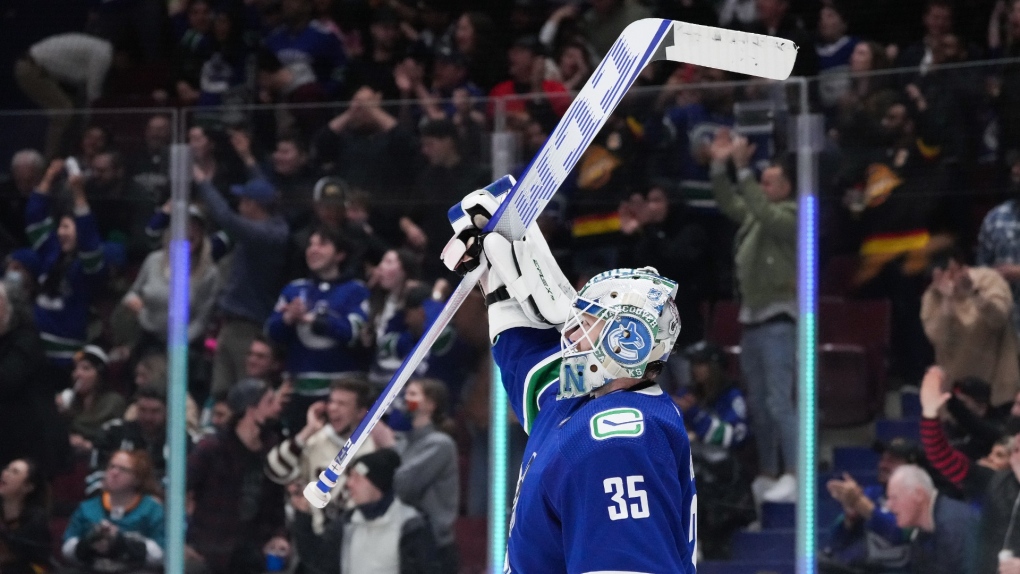 With their playoff hopes hanging by a thread, the Vancouver Canucks may have been fortunate to skate out of Rogers Arena with a 4-2 win on Saturday night.

“It wasn't a Picasso,” said coach Bruce Boudreau, as the Canucks moved within four points of a wild-card playoff spot. “We didn't play our best game, but we sort of grinded it out. Found a way and got great goaltending.”

“We played well enough to get a point, if not two,” countered Sharks coach Bob Boughner. “Had our scoring chances again. We had breakaways, we had three posts, we had looks at the end on our six-on-five, six-on-four situation. We had plenty of opportunities to score. We didn't get it done and that's the result.”

Thatcher Demko made 35 saves as he became the first Vancouver goaltender to reach the 30-win mark since Roberto Luongo in the 2011-12 season. In the Sharks net, Kaapo Kahkonen made 35 saves, but saw his record drop to 0-3-0 since he was acquired from the Minnesota Wild at the March 21 trade deadline.

“Our starts haven't been that good at home,” said defenceman Oliver Ekman-Larsson. “We wanted to make sure that we came out hard and I thought we did that. But at the same time, we took too many penalties. We just have to focus on playing the way we need to play.”

Depth scoring ruled the day, as the Canucks (35-28-10) got goals from Jason Dickinson, Conor Garland, Alex Chiasson and Luke Schenn. Tomas Hertl and Nick Bonino replied for the Sharks (29-33-9), who are now winless in their last six games (0-5-1).

“Chiasson has been really good, and for Dickie to get that goal - for a guy that hasn't played a lot lately, that was really good to see,” Boudreau said.

The eventful first period ended in a 1-1 tie. Dickinson opened the scoring with his fourth of the year at 2:03 and Hertl replied for San Jose on a two-man advantage at 7:33. The opening frame featured three minor penalties to each team, as well as fighting majors from a tussle between rookies Will Lockwood of Vancouver and Noah Gregor of San Jose.

Dickinson's goal came after he intercepted an errant pass from Sharks defender Ryan Merkley near centre ice, then streaked down the right wing, deked Kahkonen and deposited the puck into the back of the net. Merkley was hit hard by Kyle Burroughs after releasing the puck and was sent to concussion protocol. He later returned to finish the game.

“I wasn't really expecting (the hit), so it just caught me out of nowhere,” Merkley said “I think my head just got squeezed against the boards or the glass with his shoulder, so just caught me off guard a little bit. Took a few seconds to regroup.”

The teams traded goals again in the second period, with Garland scoring his first in 20 games on a rush down the wing, and Bonino tipping a Brent Burns shot past a surprised Demko.

Chiasson's goal at 2:07 of the third proved to be the game winner, a second effort where he tipped a pass from Bo Horvat past Kahkonen.

“I didn't get as good of a shot as I wanted to, but it was a good place for Bo to get back on it,” he said. “It feels like when we play that way. We shoot, we get it back, we create a second opportunity. Nice to get off to a good start during the third.”

With 2:11 left to play, the Sharks upped the pressure by pulling their goalie. A pair of icing plays by Vancouver were followed by several good scoring chances before Tyler Myers was called for cross-checking with 39.3 seconds left in regulation. But the Canucks held the fort to record their third-straight win as Schenn hit the empty net with one second left on the clock.

Power-play opportunities were plentiful for both sides in the game, but after going 4-for-5 with the man advantage in their last two games, Vancouver was 0-for-7 on Saturday. San Jose went 1-for-5, capitalizing only on Hertl's two-man-advantage tally.

With the win, the Canucks move within four points of the second wild-card spot in the NHL's Western Conference. They're four points behind both the Dallas Stars and the Vegas Golden Knights.

This report by The Canadian Press was first published April 9, 2022.