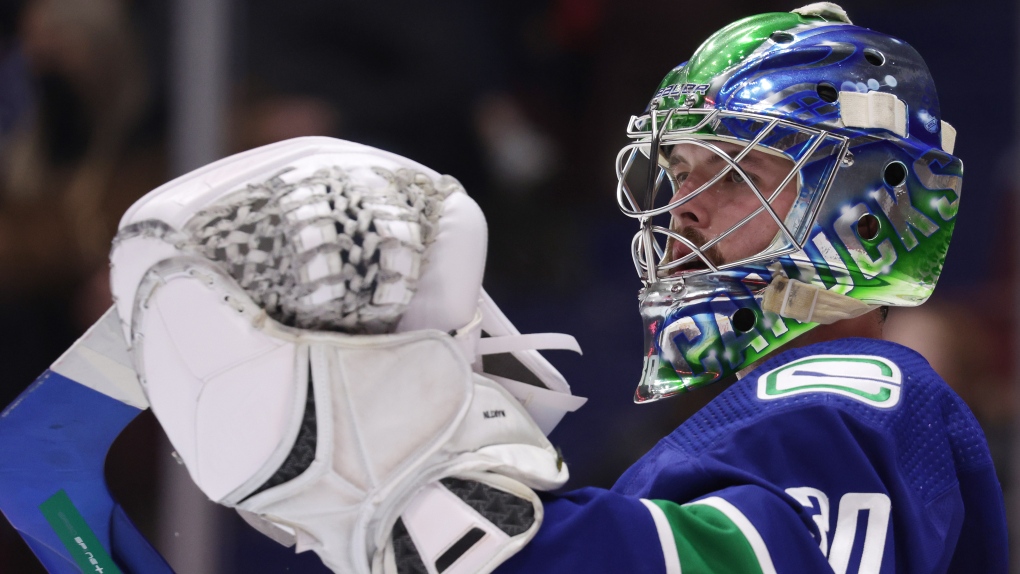 Vancouver Canucks goalie Spencer Martin looks on during a stoppage in play during the first period of an NHL hockey game against the Florida Panthers in Vancouver, on Friday, January 21, 2022. THE CANADIAN PRESS/Darryl Dyck
Vancouver -

The Vancouver Canucks are down two more goalies due to COVID-19.

Head coach Bruce Boudreau says Spencer Martin has been placed in the NHL's COVID-19 protocol and Arturs Silovs of the American Hockey League's Abbotsford Canucks has tested positive for the virus.

Martin made his debut for Vancouver on Friday, backstopping the Canucks (18-18-4) to a 2-1 shootout loss to the Florida Panthers, the NHL's top scoring team.

Star netminder Thatcher Demko and backup Jaroslav Halak are already in protocol, so Michael DiPietro is the lone goalie available to start Sunday when the Canucks host the St. Louis Blues.

Rylan Toth of the University of B.C. Thunderbirds will act as the emergency backup goalie.

This report by The Canadian Press was first published Jan. 23, 2022.

A daylong memorial began Monday in Kamloops, B.C., at the site of what was once Canada's largest residential school on the one-year anniversary of the announcement of the detection of unmarked graves.

Hundreds of thousands of people remain without power after Saturday's powerful storm that left at least nine dead and caused extensive damage throughout southern Ontario and Quebec.

A Russian soldier who pleaded guilty to killing a civilian was sentenced by a Ukrainian court Monday to life in prison -- the maximum -- amid signs the Kremlin may hold trials of its own, particularly of the captured fighters who held out at Mariupol's steel plant.

The first of three charter flights bringing Ukrainian refugees fleeing Russia's invasion to Canada is to land in Manitoba this afternoon.

An email encouraging members of the Canadian Armed Forces to consider contacting Habitat for Humanity if they can't find affordable housing is casting a spotlight on a growing challenge facing many military personnel and their families.

The Canadian royal visit took place at a time when many are starting to view Prince Charles differently, given that his destiny to be King seems to loom closer, Richard Berthelsen writes in his exclusive column for CTVNews.ca.

Wreckage found of plane that disappeared in Ontario with Alberta men onboard, police say

The wreckage of a small plane that disappeared last month in northern Ontario with two men aboard has been located in Lake Superior Provincial Park.