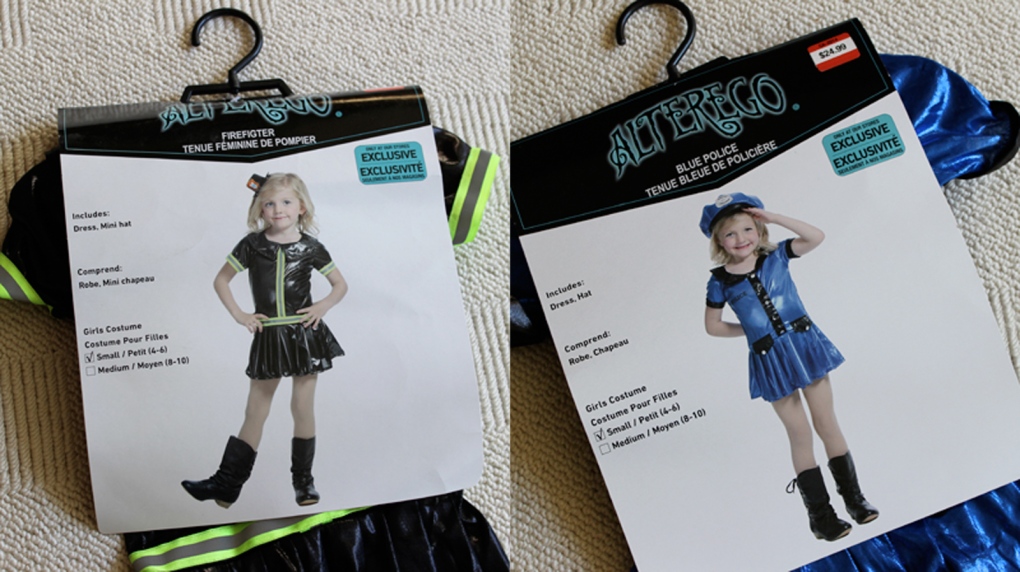 Girls' police and firefighter costumes made by Alterego have been pulled from Value Village shelves after complaints that the costumes made for girls as young as four years old were too sexualized. Oct. 21, 2014. (Courtesy Raina Delisle)

Value Village says it will pull a line of children’s costumes from its stores after a Victoria mother expressed outrage that the outfits hyper-sexualized girls as young as four years old.

Raina Delisle, a freelance writer, said she recently went shopping at a Value Village outlet in Victoria with her three-year-old daughter and was taken aback by the “highly sexualized” costumes.

“There was sexy pumpkin, there was sexy Minnie Mouse. Everything seemed to be short and tight and inappropriate,” Delisle said. “But I was most concerned by the police officer and firefighter costumes, because the girls and boys version were so different.”

Disgusted, Delisle snapped a photo of the girls’ costumes, which manufacturer Alterego recommends for girls between four and six years old. While the boys’ versions of the costumes looked similar to the uniforms used by police and firefighters, “the girls’ versions were highly sexualized and looked nothing like the real thing: Skin tight, shiny, short skirts and short sleeves,” she said.

The costumes concerned Delisle because of the underlying message they send to young girls and boys, she said.

“They were in the stores and accessible to children, who would see the models on the package and think that is something to aspire to; that that is what they should be dressing up like for Halloween,” she said. “To me, it’s a message that girls’ bodies are more important than their brains, and they have to be sexy to be successful.”

Delisle said she contacted the company Friday to complain about the inappropriate costumes, but Value Village did not return her call.

Undeterred, she contacted the company again, this time not as a mother, but a freelance writer working on an article, and received a response by Monday that exceeded her expectations – by promising to remove the costumes in question from every one of its North American stores.

In a statement, a spokesperson for Value Village, or Savers as it’s known in the United States, said it took concerns over the costumes seriously.

"Every year, we select our Halloween inventory based on feedback and demand from shoppers,” the company said. “We’ve taken the recent comments surrounding certain Halloween costumes sold in our stores very seriously, and as such, are removing this merchandise from our sales floors. We apologize to those who were offended, and as we move forward, we will evaluate all costumes and packaging keeping this specific customer feedback in mind."

Delisle said she believes the company did the right thing, and will follow up with a visit to the store later this week to make sure the costumes have actually been pulled.

“I couldn’t have hoped for a better outcome,” she said. “It was prompt and they’re taking action, so no hard feelings.”

Alterego, the Chinese-based manufacturer of the costumes, could not be reached for comment.

Delisli says despite her public comments, she’s not against costumes with short skirts or tight clothing, but “there’s a time and a place for dressing up like that. And it just doesn’t belong on Halloween for pre-schoolers.”

Since writing an online article about the ordeal, Delisle said the majority of comments have been from other similarly upset parents supporting her cause, but some dissenters are coming out of the woodwork.

Delisle said she plans on writing a follow-up article about the company’s response and some of the comments she has received from other parents.