Newly released data from Canada Mortgage and Housing Corporation is once again painting a bleak picture for renters in Metro Vancouver.

According to a "Rental Market Report" published Wednesday, vacancy rates in the region now sit at just one per cent—less than half the national average.

That's an improvement of about 0.1 per cent, but it's hardly enough to make a dent in the Metro Vancouver's rental housing crisis.

"This is the fifth consecutive year it's been at or near one per cent," said CMHC analyst Eric Bond.

The report also found that prices across the region have gone up 6.2 per cent during that period.

"That's composed of increases for existing tenants…where it's four per cent and unites with new tenants where they can raise the rate to the market level," Bond said.

According to the survey, Vancouver had the highest average monthly rent for a two-bedroom apartment in Canada last month at $1,649, followed by Toronto at $1,467 and Calgary at $1,272.

"Some investors are choosing to sell or repurpose their unit and take it out of the rental market as a result," Bond said.

Any improvement to the rental market will likely be slow as demand continues to outpace supply.

And things don't look much better at the national level.

According to the survey, Canada's vacancy rate dropped for a second year in a row and is now at 2.4 per cent. At the same time, demand for rental housing grew at a faster pace than supply, the CHMC said.

Ontario, B.C. and Manitoba all saw an increase in its vacancy rates, while the rate dropped in Quebec, Alberta, Saskatchewan and the Atlantic provinces.

The report looked at purpose-built rental units and condo apartments available for rent. It found the average price for a two-bedroom apartment jumped by 3.5 per cent from October 2017 to October 2018—almost a full percentage point over the inflation rate.

With files from CTV Vancouver's Sheila Scott and The Canadian Press 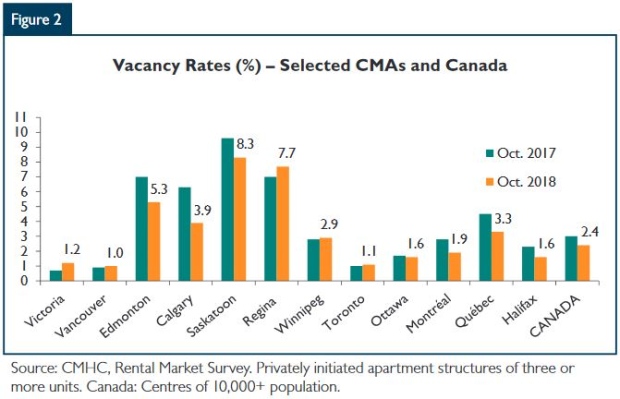