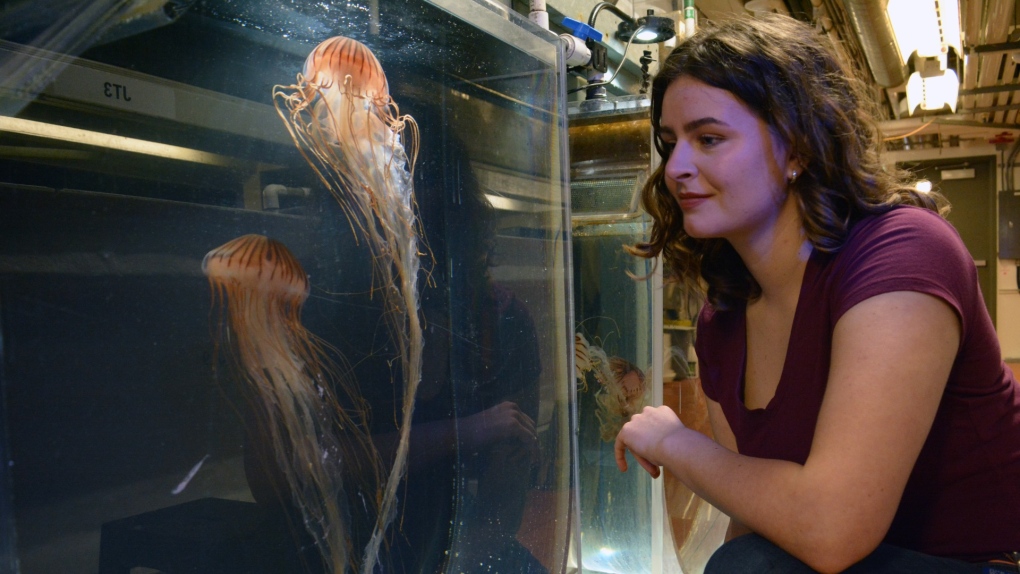 Jessica Schaub is a first year PhD student at UBC's Institute for the Oceans and Fisheries. (Photo: Vancouver Aquarium)

A UBC researcher will soon embark on the trip of a lifetime, circling the globe over the course of several months to further her understanding of a creature that has captivated her for years: jellyfish.

Jessica Schaub is a first year PhD student at UBC's Institute for the Oceans and Fisheries. Her trip is being funded by a Hugh Morris Fellowship, administered by the Kimberley Foundation.

Polyp research will continue in Argentina, before Schaub rounds out her trip in Australia studying blooms of dangerous Irukandji jellyfish and working with a team developing a rapid test that uses environmental DNA to quickly determine whether the sometimes-deadly jellies are present.

"It's quite an array of experiences," she told CTV News in a recent interview.

"I'm really excited to get the breadth of knowledge and information from all the people that I'll be visiting."

Schaub grew up in rural Alberta and moved to Vancouver to attend UBC as an undergraduate. She's been studying marine biology ever since.

Asked what attracted her to the topic, she likened it to having a favourite colour.

"You don't really know why your favourite colour is yellow," she said. "It just is. I've just always really been drawn to ocean science and especially marine biology."

Schaub also mentioned watching a documentary about Japanese fishermen dealing with giant jellyfish when she was in Grade 12. The experience heightened her fascination with ocean science, and Japan eventually became one of the destinations for her upcoming trip.

She said those interested in following her trip can do so by following @jellieswithjess on TikTok and Instagram.

Bill Graham, who served as foreign affairs minister when Canada decided against joining the U.S. invasion of Iraq in 2003, has died at the age of 83.

Under scrutiny, minister says RCMP's yearslong use of spyware tools is limited

Public Safety Minister Marco Mendicino is defending the RCMP’s yearslong and undisclosed use of spyware capable of accessing cell phone and computer microphones, cameras and other data as part of dozens of major investigations. Testifying before a parliamentary committee on Monday, Mendicino said the national police force's use of these tools has only be permitted in 'the most serious offences.'

Sources close to the government's proposed $5.3 billion dental care program say the Liberals are planning a temporary solution that involves giving money directly to patients in order to keep their promise to the NDP while they work on a more permanent answer.

The organization that runs the Montreal Pride Festival says it is conducting an internal investigation after it abruptly cancelled the city's official Pride parade on Sunday -- hours before it was to begin.

A suspect already in handcuffs has allegedly managed to overpower a Toronto police officer and steal their SUV, sending police on a wild early morning chase.