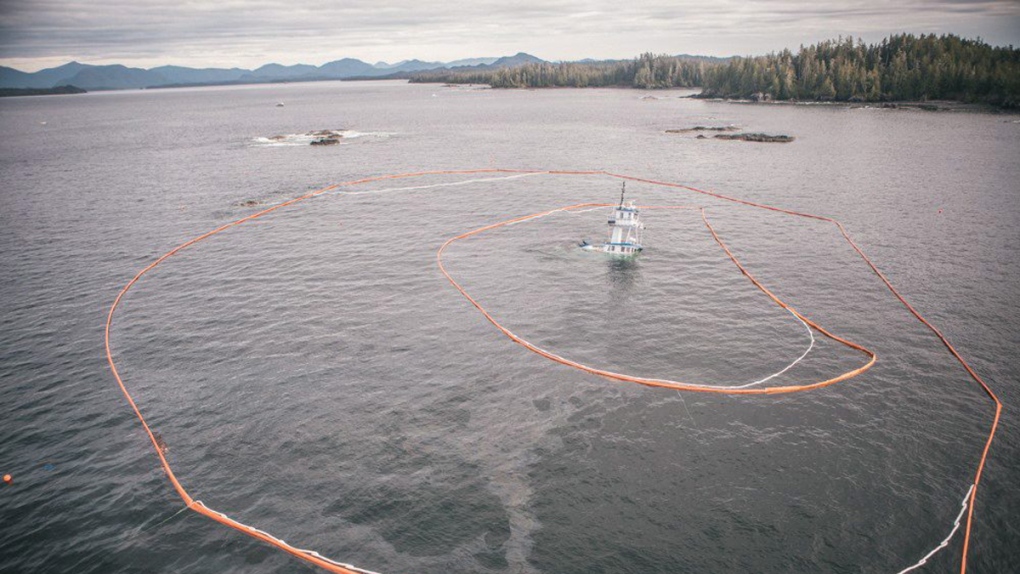 BELLA BELLA, B.C. - The company responsible for a fuel spill that contaminated the fishing territory of a First Nation on British Columbia's central coast has been fined $2.9 million but the chief of the Heiltsuk says the sentence is a long way from justice.

Texas-based Kirby Corp. pleaded guilty in May to three separate counts after the tug Nathan E. Stewart ran aground and sank, spilling 110,000 litres of diesel and heavy oils in October 2016.

The guilty pleas were under the Fisheries Act, the Migratory Birds Convention Act and the Pilotage Act for the spill that damaged both fish and birds, and for failing to have a pilot aboard the vessel.

The Transportation Safety Board ruled last May that a crew member missed a planned course change because he fell asleep while alone on watch.

Chief Marilyn Slett said Tuesday the Heiltsuk Nation wanted the company to be banned from its territorial waters until there is proper restitution in accordance with the nation's traditional laws to respect the land and people who depend on the sea for sustenance and jobs.

Slett, along with elders and youth as well as representatives for Kirby, participated in a sentencing circle during provincial court proceedings held in a gymnasium in Bella Bella before Judge Brent Hoy announced the sentence.

“The effects of the spill have rippled throughout our community,” Slett said in her victim-impact statement. “Our community was traumatized by the actions of visitors in our territory, and we have collectively grieved and mourned our losses.”

“It was emotional,” she said afterwards. “We're still feeling the effects of this spill and we're continuing to try and resume life to see what we can do moving forward to ensure that this doesn't happen to us again.”

The community still does not have adequate resources to respond to any future incidents, Slett said.

Families can't fish in Gale Creek and the nation is trying to gain justice through a civil lawsuit against Kirby, Slett said, adding the company has chosen not to do an environmental impact assessment.

Paul Welsh, spokesman for Kirby, declined to comment but issued a statement from the company.

“We sincerely regret this incident and we have amended our operating procedures, training, auditing, promotion protocols and equipment to help reduce the potential for future accidents,” it said.

An agreed statement of facts presented in court says a crewman who fell asleep was awoken when the tug boat ran aground and that Kirby has since installed an alarm system on all of its vessels in case a navigator fails to acknowledge a visual warning.

The crew tried to surround the vessel with a boom but it broke apart in the waves and the crew later tried pumping diesel onto a barge to prevent further discharge into the water, it says. The vessel sank about four hours later.

The statement says the company paid the Heiltsuk $3.4 million for response costs in keeping with an agreement with the community on Oct. 29, 2016, as well as $200,000 for anticipated losses associated with clam and fish harvesting.

William Housty, 37, said in his victim-impact statement that he was among the first responders after the spill and joined Slett in serving as an incident commander on behalf of their nation.

“My 27 days in this role were one of the most stressful, hurtful and challenging of my life,” he said, adding his team worked hard to fit into a response system the members knew nothing about and fought to be included with Kirby in assessing a barge that had also sunk.

“It was from that point on that it was stated that for any and every crew that went anywhere in our territory there had to be a Heiltsuk person on that crew. This caused extreme annoyance to everyone but we forced it to happen,” said Housty, who is chair of the board of directors for the Heiltsuk Integrated Resource Management Department.

About 70 per cent of the community is unemployed and about 40 people who relied on the clam fishery through the fall and winter can no longer provide for their families, he said.

Amid those efforts, the effects of emotional trauma linger among many of the first responders following the spill, he added.

“This incident has caused so much damage to all of us and there is no amount of money in the world that can replace what was lost.”