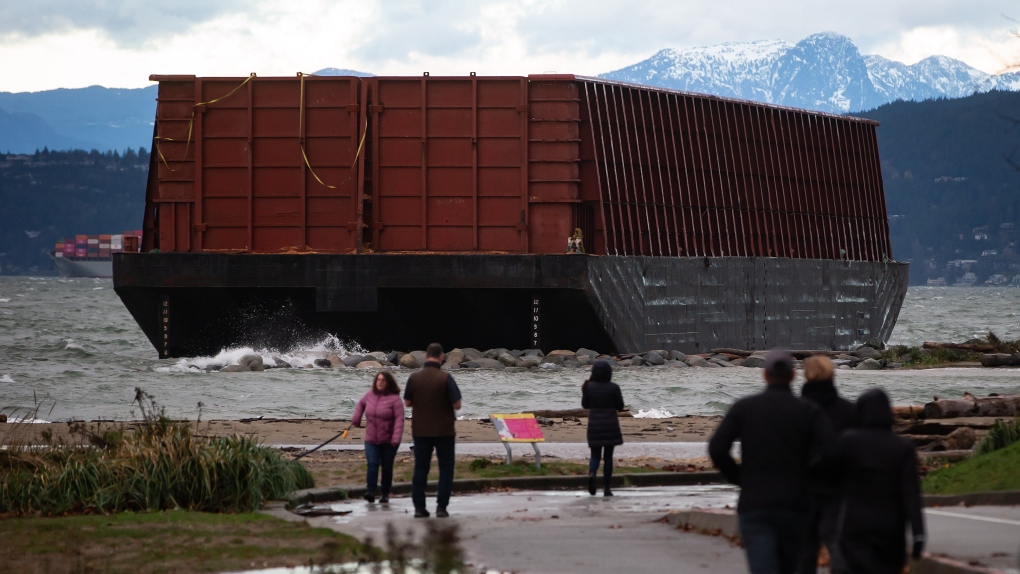 A barge that drifted loose on English Bay sits grounded on rocks during a massive windstorm in Vancouver, B.C., on Nov. 15, 2021. THE CANADIAN PRESS/Darryl Dyck
Vancouver -

Two months after a runaway barge got stuck on Vancouver’s shores during a series of historic storms, plans to recover the vessel remain on the rocks.

“The removal is a complex issue, with several factors to consider in addition to tide levels, including safety, security and environmental protection,” Transport Canada’s Sau Sau Liu wrote in an email to CTV News.

Following several failed attempts to remove the barge, it remains grounded between English Bay and Sunset Beach, where it first parked on Nov. 15, 2021. It’s gained celebrity status to the point that, as recently as Sunday, “Barge on the Beach” T-shirts were selling for $20 each on the nearby seawall.

Transport Canada reiterated Monday that the owner is responsible for removing the vessel. CTV News reached out to Sentry Marine Towing Ltd several times for comment, with no success.

“It’s a complex situation,” said the City of Vancouver’s Jeannine Guérette, mimicking the language from federal officials. “Many considerations are being taken into account including safety and environmental protection."

The city is tracking all costs related to the barge, and plans to bill the owner for reimbursement, Guérette added.

In the meantime, one Canada Research Chair professor warned the barge could put nearby ecosystems at risk.

“There’s surely chemicals on board that could leach out, and the amount of rust that could occur in salt water over a couple of months is probably enough to affect nearby ecosystems,” said Kai Chan, a professor at UBC’s Institute for Resources, Environment and Sustainability (IRES).

Many problems like this, Chan argued, comes down to a lack of transparency with environmental data.

“We’re just left completely in the dark,” said Chan, adding that Transport Canada has a lot of problems to solve in B.C. “It’s amazing how long governments can let crap like this go on. If it’s not killing anybody, it’s the kind of thing they can ignore for years and years.”

The barge has also renewed discussions over reconciliation efforts, in the wake of Vancouver’s park board putting up a temporary “Barge Chilling Beach” sign in the area on Dec.15.

Someone spray-painted the word “Í7iy̓el̓shn,” which social media users identified as a local Indigenous name for the area, onto the sign on Jan. 3, and again this past weekend. On Twitter, members of the Indigenous community explained why the park board's sign isn’t amusing for everyone.

“This barge sign was a fun joke but the work of decolonizing isn’t fun, it’s been harmful to be Indigenous to Vancouver yet utterly erased,” Ginger Gosnell-Myers, a fellow with SFU’s Urban Indigenous Policy/Planning, wrote after the first graffiti incident. Vancouver has faced growing calls to post signage acknowledging and reflecting traditional Indigenous names in the city.

Following the same incident, Vancouver Councillor Sarah Kirby-Yung tweeted, “I’m so fed up. This sign was a small thing that provided some levity & smiles during a tough time. We need more kindness, not the opposite."

Depending on who is asked, the barge is a perceived affront to reconciliation; a silly backdrop for selfies and marriage proposals; a stark reminder of climate change sticking out like a sore thumb in downtown Vancouver.

Or, as the city puts it, it's a "complex situation" that’s short on solutions.

OPINION | Don Martin: Ford on cruise control to victory in Ontario while Alberta votes on killing Kenney as UPC leader

It's becoming a make-or-break week for two Conservative premiers as their futures pivot on a pair of defining moments, writes Don Martin in an exclusive opinion column for CTVNews.ca.