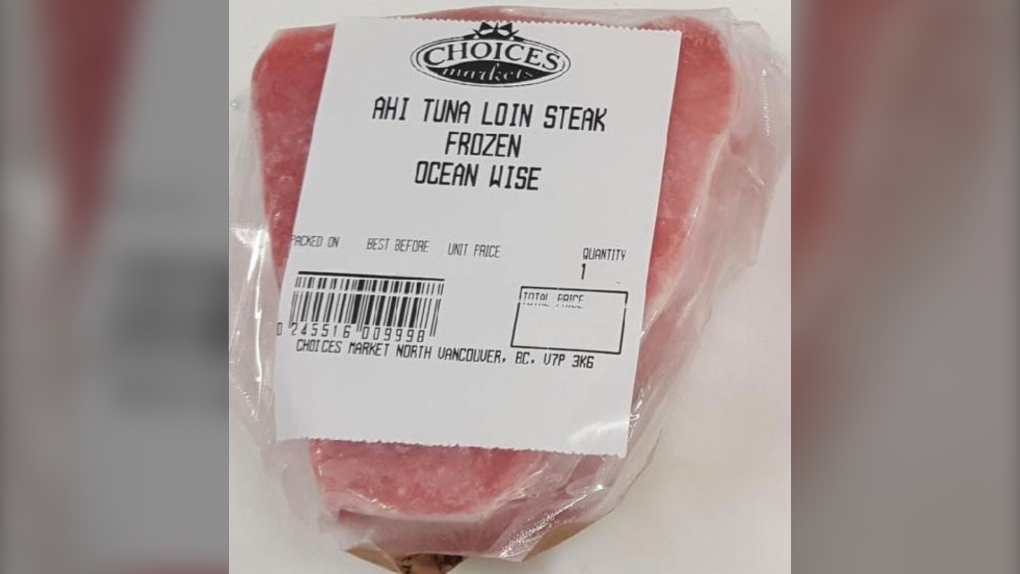 A number of tuna products are being recalled over high levels of histamine, according to Health Canada. (Handout- Health Canada)

VANCOUVER -- A variety of tuna products sold in B.C. are being recalled because of high levels of histamine, according to the Canadian Food Inspection Agency.

The CFIA announced on Feb. 25 that Seven Seas Limited was recalling its Unomundo brand tuna loins and steaks. Consumers are being warned not to eat them, and shops and restaurants are being advised not to sell or use them.

Health Canada said there have been "reported reactions" from people, and the recall was prompted by complaints from consumers. The CFIA has launched a safety investigation, which the agency said could potentially lead to other products being recalled. The items were also sold in Alberta, Ontario, Quebec and possibly other locations across Canada.

Both products have lot number 59831, which only appears on the master case. Anyone who bought them is advised to contact the store where they were purchased.

The symptoms include a burning throat, diarrhea, dizziness, facial swelling, headache, vomiting and a peppery taste in the mouth, according to Health Canada.

On Feb. 28, Health Canada widened its warning to include other tuna products such as sashimi grade ahi tuna loin steaks, ahi tuna loin steaks, and ahi tuna sold in B.C., Alberta, Manitoba, Saskatchewan and the Yukon. The items were available at Choices Market locations in Vancouver and Burnaby, IGA stores in Kelowna, Vancouver and Madeira Park, as well as Save on Foods stores across western Canada. The items were sold from Sept. 18, 2019 to Feb. 2020.

Anyone who thinks they've become sick from eating the recalled product should call their doctor, and the recalled items should be thrown away or returned to the store where they were purchased, according to Health Canada.