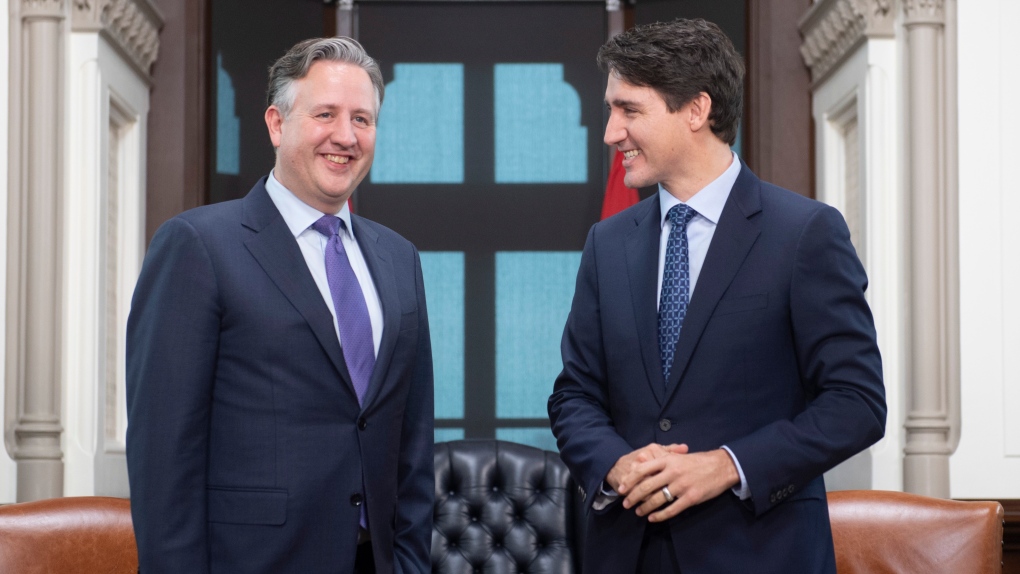 Prime Minister Justin Trudeau meets with the Mayor of Vancouver, Kennedy Stewart in his office on Parliament hill in Ottawa on Thursday November 21, 2019. (THE CANADIAN PRESS/Adrian Wyld)

The city's health agency has applied for $6 million from Health Canada to allow for the safe distribution of diamorphine - a narcotic painkiller more commonly known as heroin.

Stewart said he found it encouraging that Trudeau didn't shut the door to the idea when the two met.

“(Trudeau said) that he wants to work together ... and open to having a conversation and then looking to us to lead, with health-care professionals, to try and figure out the best solutions to these problems,” he said after the meeting wrapped up. “So I'm very encouraged by that and grateful.”

On average, Stewart said, one person dies every day from an opioid overdose in Vancouver, where residents are calling for more urgent action.

The mayor said he was also pleased to learn Patty Hajdu is the new health minister, because she has experience with harm-reduction strategies. The Liberal MP spent years working on drug awareness in her hometown of Thunder Bay, Ont., and was executive director of an emergency shelter there.

Hajdu said later that while she has not yet seen Vancouver's proposal, she looks forward to sitting down with Stewart Friday.

“I think it's really important that we work with local and municipal leaders on solutions that really make sense for their communities,” she said.

“I'm looking for good solutions on the opiate crisis,” she said.

Vancouver was the first jurisdiction in Canada to open a legally sanctioned supervised injection site in the early 2000s and Stewart says he wants to keep exploring other innovative ways to solve its deadly opioid crisis.

“We're in a minority-government situation and there's windows to co-operate, come together, build things that Canadians want,” said Stewart, who was a New Democrat MP until he resigned to run for mayor last year.

“I want to make sure this window doesn't close before we deliver on these key priorities.”

This report by The Canadian Press was first published Nov. 21, 2019.