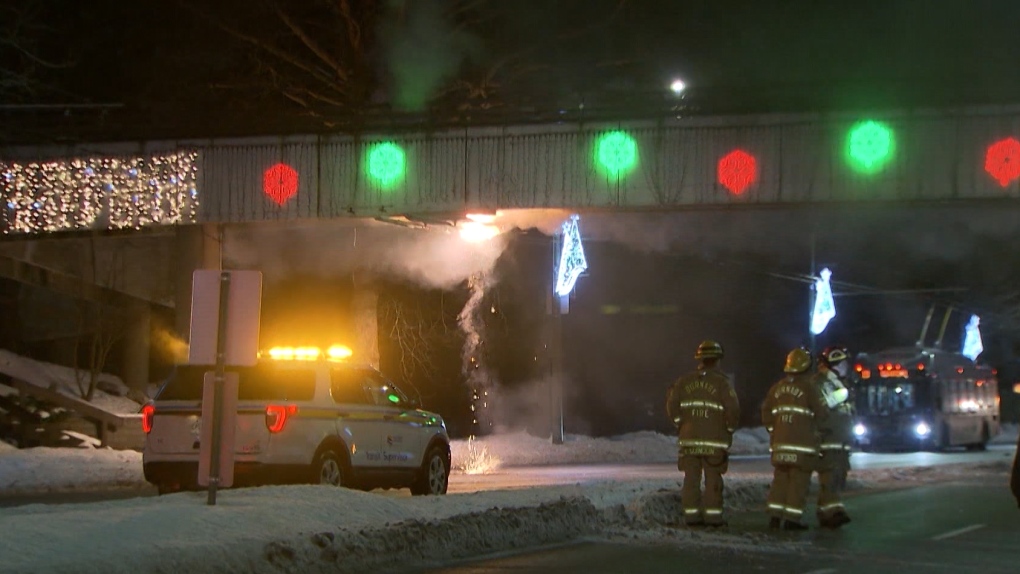 Flames can be seen on a trolley wire near the Burnaby and Vancouver border early in the morning of Jan. 17, 2020.

VANCOUVER -- Downed trolley wires that caught fire near the border of Burnaby and Vancouver led to dangerous situation for bus passengers and drivers early Friday morning.

Smoke and flames were seen blazing beneath a pedestrian overpass that links Swanguard Stadium and the Telus Communications building.

The trolley wires were on the westbound side of Kingsway, and traffic in the area came to a standstill.

Burnaby Fire Department arrived and couldn't put out the fire as the wires were still live.

Thirty minutes into the fire, so much wire and material melted that it sent the live trolley wires crashing down.

The wires fell on passing cars, but there were not reported injuries.

"We don’t want anyone going up there, give it about 30 metres,” one firefighter could be heard yelling.

There was a quick response from the City of Burnaby engineering department, as they had crews close by. Snow plows blocked the road in the area as a safety precaution.

"There were no injuries and the cause is unknown at this stage. The 19 bus route is currently being diverted in the area."

Traffic was closed for several hours in the area, but has since opened. Coast Mountain Bus Company has technicians on scene assessing the situation.

Trolley wires came crashing down after they caught fire under a pedestrian overpass on Kingsway this AM. The wires came down into Vancouver. @BurnabyFireDept @IAFF323 ensured public safety. @TransLink transit supervisors were scene. Details on @CTVMorningLive & @CTVVancouver pic.twitter.com/6oMEcotVnp