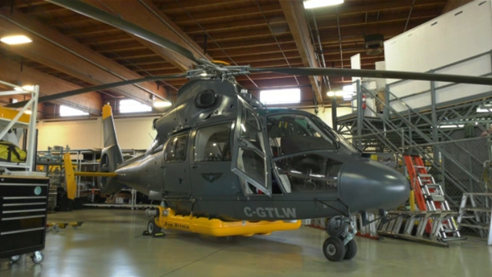 B.C. has a new tool in its forest firefighting arsenal: a helicopter equipped with night vision goggle technology known as a helitanker.

VANCOUVER -- Despite successful trials in early July and a small string of subsequent fires in the province, the BC Wildfire Branch hasn’t continued testing Canada’s first night-flying firefighting helicopter.

A department spokesperson confirmed the stall in the province’s trials of helitankers with night vision technology, but insisted there were good reasons for the delays.

“We’ve been looking for opportunities to continue our trials but with limited fire activity in the province, we haven’t really had those opportunities just yet,” said Jody Lucius, who provided a different set of goals and parameters than a previous news release and the department’s own superintendent of aviation management.

On July 6 and 7, the BC Wildfire Branch tested fire suppression at night with a helitanker operated by Talon Helicopters, and a "number of different drop heights and air speeds were tested successfully to achieve different objectives.”

“It is a game changer,” said Leanne Ingham, superintendent of aviation management for BC Wildfire at the time, describing overnight aerial firefighting as a chance for ground crews to catch up. “The conditions are better for fighting fires — the temperatures are down, the humidity is up and often the wind is down, so it makes the water that much more effective coming from the aircraft. We're pretty optimistic.”

But Lucius now says their goal for the night-flying helicopter isn’t fighting fires directly at all.

“We might use it on a fire to do mapping at night, we might use it for fire detection in certain circumstances and really those are our main intents at this time until we can prove it is safe and effective to operate with night vision technology at night,” she told CTV News.

California has been using night-flying helicopters with specially-trained pilots since 2013 and in February, Cal Fire officials were elated to receive a dozen S-70i Firehawks to give them round-the-clock firefighting capabilities.

Talon Helicopters, which operates an Airbus AS365 N2 Dauphin used in B.C.’s trials in Penticton, says they’re fully vetted and authorized to perform the challenging work of night flying by the federal regulator.

“Transport Canada has approved Talon for aerial work at night as well as passenger transport, and by approving us to carry passengers at night that’s really the gold standard,” said operations manager Kelsey Wheeler, noting the company is ready and able to continue trials to prove the technology.

“So much of testing new fire fighting systems is going through communication protocols, how effective is our safety plan and the resources we’re using as well as how effective we are in fighting the fire,” he said, noting this year’s relatively slow fire season could be a benefit for the trial phase. “If you’re on a fire that’s started and spreading quickly that’s more difficult, a good next test would be a real fire that’s moving slowly.”

When it announced the successful trials, the BC Wildfire Branch had said “the next phase of the night vision trials will involve responding to an active wildfire, if possible.”

While Lucius pointed out this fire season has been exceptionally slow, with far less fire activity than the 10-year average, the agency’s own website shows since July’s trials there were six wildfires half a hectare or larger recorded from the Friday of the B.C. Day long weekend through the Monday — one of them the Dry Lake fire near Princeton that had homeowners on evacuation alert as the multi-day fire grew to 21 hectares.

The province has been planning and developing nighttime aerial firefighting for two years and did not specify what risks they are now concerned about or why they haven’t used it for the fires that have started since the successful trials earlier in the summer.

“Any time we are flying it is a risk, it’s one of our top safety hazards we do have with BC Wildfire service in addition to driving and obviously the risks that come along with fire itself,” said Lucius.