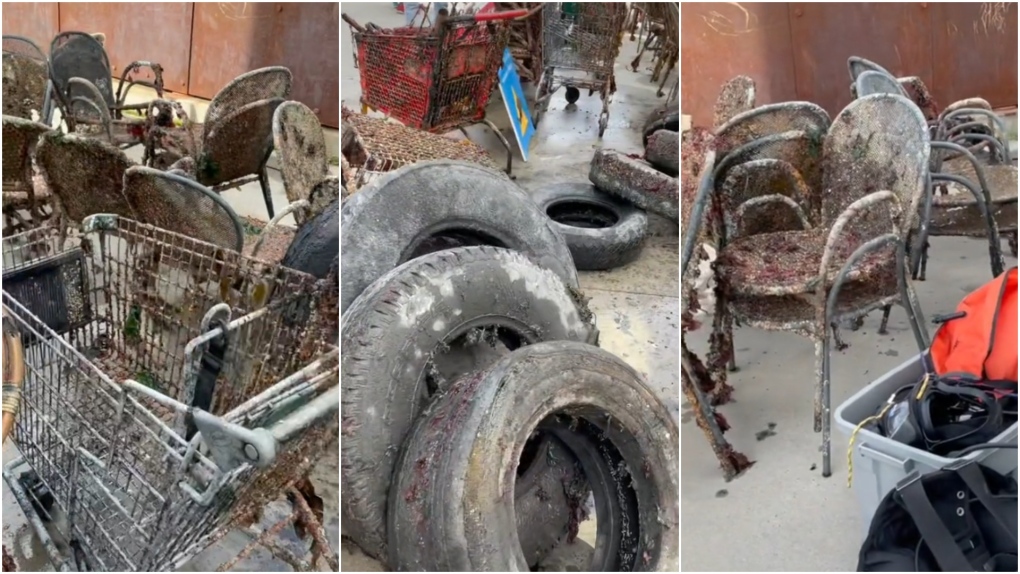 Still images from Henry Wang on TikTok (@cleanerlakes) show trash hauled from the foot of the Lonsdale Quay during a clean-up dive in September 2021.
VANCOUVER -

A local diver is using social media to highlight the amount of garbage hidden beneath B.C.'s waters.

Videos posted by Henry Wang on the platform TikTok show what he describes as 618 kilograms (1,362 pounds) of trash recently pulled out of the water near North Vancouver's Lonsdale Quay.

Among the items are about three dozen chairs, 10 tires, three shopping carts and an abandoned crab trap. He said there was another trap he and other divers found, but they were unable to pull it out of the silt.

Wang is one of the founders of a group that does what he calls in the videos "cleanup" dives. The dive into the Burrard Inlet in his latest videos was part of an event sponsored by Return-It, a not-for-profit corporation that manages recycling of some items in B.C.

The group, called Divers for Cleaner Lakes and Oceans, has done 160 such dives, according to its website. During these dives, nearly 19,000 kilograms (41,000 pounds) of trash have been removed from bodies of water in B.C.

The volunteer divers group, a non-registered non-profit that has been around since 2013, says it hopes removing this garbage will "pass on a cleaner and healthier environment to our next generation."

Videos Wang has posted from other locations show dozens of beer cans, a tackle box, 17 pairs of sunglasses, cellphones, discarded underwear and a mountain bike.

Wang also takes questions from his 9,000 followers, including "What's with all the shopping carts" "What do you do with all the things you find" and "How do you keep safe?"