'Tragic and haunting memory': B.C. family has been missing for 30 years

The early hours of Aug. 2, 1989 was the last time anyone heard from the Jack family.

Ronnie Jack had called his mother in the Burns Lake, B.C. area and shortly after, it's believed, he and his partner Doreen left their home their two young children. Witness accounts suggest they left with an unknown man in a dark pickup truck.

They were expected to return 10 days later, but have not been seen since.

Thirty years later, RCMP are still unsure of what happened to the Jack family. Over the years, several properties have been searched as possible burial sites.

None of the searches have been successful, and police say a family of four going missing is "very unusual." It's so unusual that, except for the Jacks' case, it may never have happened in Canada before or since.

Most recently, the RCMP searched a property on the Saik'uz First Nation, south of Vanderhoof, B.C., with support of chief and council. On Aug. 28, 29 and 30 of this year, investigators used ground-penetrating radar and heavy equipment to search the area, but found no evidence of the Jack family.

"I want to thank everyone who helped with the search for their support, even though there was nothing found," said Marlene Jack, Doreen's sister and the spokesperson for the family, in a news release. "I would like to ask from the bottom of my heart that everyone with information come forward to police. Please help bring our family home."

Since the start of the investigation, Mounties have conducted hundreds of interviews and have obtained thousands of related documents.

"Our council and community would like to thank the serious crime unit from the Prince George detachment for working with us to make sure that all leads and avenues were investigated into the disappearance of the Jack family," said Chief Priscilla Mueller of the Saik'uz First Nation.

"Our community will continue to offer support for those who are affected by this tragedy and will also stay in close contact with Marlene Jack to support her in her search for answers. Our community sends our love and prayers to the Jack family in obtaining closure."

Police believe Ronnie spoke to a man at the First Litre Pub the night before he and his family left in 1989.

He and his partner were offered jobs at a logging camp believed to be near Clucluz Lake, and because they didn't own a vehicle, an unknown man offered to drive them to the job site. He followed Ronnie back to his house after talking to him at the pub and waited while the family of four packed their things.

At 11:16, Ronnie called his brother in Southbank, and around two hours later he called his parents in Burns Lake.

Even 30 years later, Prince George RCMP say the investigation is still active and anyone with information about the Jack family or who is responsible for their disappearance is asked to contact Mounties at 250-561-3300. 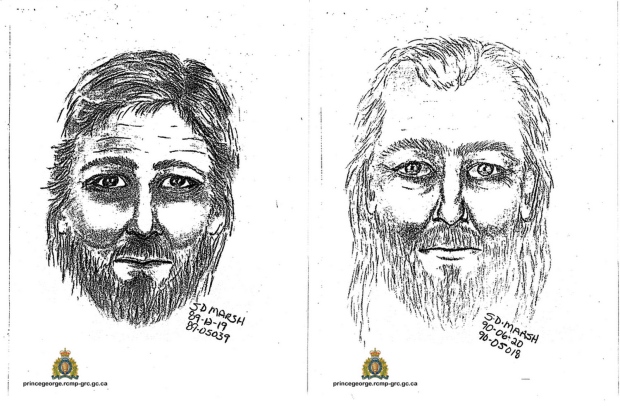 Sketch of the unknown man, who police believe offered the Jack family a ride to their new job site more than 30 years ago. (Submitted)