‘To the best husband a guy could ever have’: Inclusive Valentines aim to fill gap in market 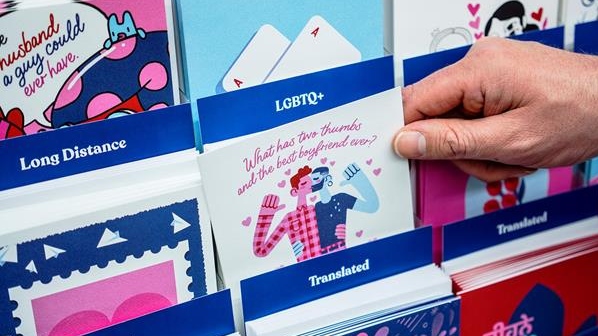 Inclusive Valentine's Day cards are on sale at London Drugs.

VANCOUVER -- A new line of Valentine’s Day cards is aiming to fill a gap in the market with inclusive messages of love.

The Cards for All collection is a partnership between London Drugs and United Way, with all the proceeds going to the charity’s initiatives in Western Canada. At $5 apiece, the 31 different cards reflect all kinds of relationships, including non-binary Valentines,  same-sex couples, non-exclusive relationships, and even one for an ex.

There are also cards in Tagalog, Farsi, Braille and Punjabi; cards for a platonic friend or a roommate; and even cards addressed to your cat or dog.

“You’re the only one I would pick up poop for,” reads one of the pet cards.

The cards are all illustrated by Canadian artists, and United Way’s Kris Gibson says he was thrilled when he first heard the idea.

“It’s such an innovative new way to celebrate what we both stand for, which is really to ensure for a community to be healthy, it has to be inclusive of everybody," Gibson told CTV News.

London Drugs’ Palle Knudsen says the B.C.-based drugstore developed the cards after noticing a hole in the greeting card market.

“Within our traditional card set we found there were some groups that weren’t well represented, and this program is really designed to try to fill in some of the gaps and represent as many people from our community as possible,” he says.

Many companies are taking cracks at more inclusive and diverse products, some with more success than others. Barnes & Noble recently cancelled a line of “Diverse Editions” the company planned to issue for Black History Month after backlash. The classic novels all had new cover art featuring people of colour – but the books themselves were written by and about white people. Critics argued the book chain should have promoted writers of colour instead.

The inclusive Valentine’s Day cards are on sale at London Drugs stores across Western Canada, starting Feb. 7. Knudsen says if the line is successful this year, customers could see more inclusive cards in future.

“This is the first time that we’ve done this and we want to try and do as much of this as possible,” he says. “If this resonates with our customers, then I think this is an ideal way to make sure everyone is included in these types of holidays.”