Time for a mega-city in Metro Vancouver? What amalgamation could look like

Time for a mega-city in Metro Vancouver? What amalgamation could look like

Every time the municipal elections roll around, the idea of whether to merge the Lower Mainland into one mega-city resurfaces, though this time the discussion is a little different.

Vancouver is the only major Canadian city that hasn’t annexed any of its suburbs and amalgamation has been discussed on and off for years, but public opinion has continued to shift in favour of the idea; there are also other factors that could change maps in the metro Vancouver region.

Over the summer, Research Co. conducted opinion polling and found a slight majority of residents in Vancouver (52 per cent) and Surrey (53 per cent) supported the idea of merging all the municipalities into a single civic entity, but the smaller communities did not.

“There’s a significant appetite for amalgamation, as long as you live in one of the two biggest municipalities,” said pollster, Mario Canseco, pointing to the District and City of North Vancouver, as well as the Township and City of Langley. “But there are other areas where you could conceivably do something like this -- Burnaby and New Westminster, for instance, or having the Tri-Cities as a specific entity.”

In 1998, Ontario’s provincial government forced the merger of six municipalities into a singular City of Toronto with the idea that it would save money and lead to better services for citizens; that hasn’t been the case.

“Some argue it’s been revenue neutral but also that it’s sort of created side benefits in terms of improving Toronto’s international reputation,” said Simon Fraser University political scientist Sanjay Jeram, who pointed out numerous studies that tried to gauge the impact couldn’t come to a consensus as to whether there was a net negative or benefit to the mega-merger.

“I think the problem is some people see it as an ‘all or nothing’ case here, like all of Metro Vancouver or nothing, but that’s not how Toronto amalgamated,” he said, since there were six boroughs that formed first, and were then united under the current city boundaries.

In some ways, amalgamation has quietly been taking shape in the Lower Mainland for decades. TransLink has a Mayors’ Council with representatives from across the region guiding transit planning and operations, with Metro Vancouver Regional District providing area-wide water and sewage services that criss-cross municipal boundaries.

In fact, the “Metro 2050” plan splits the Lower Mainland into six “sub-regions” that could act as a template for amalgamated cities: Vancouver, Burnaby and New Westminster into one, for example, with Surrey and the Langleys together as well. 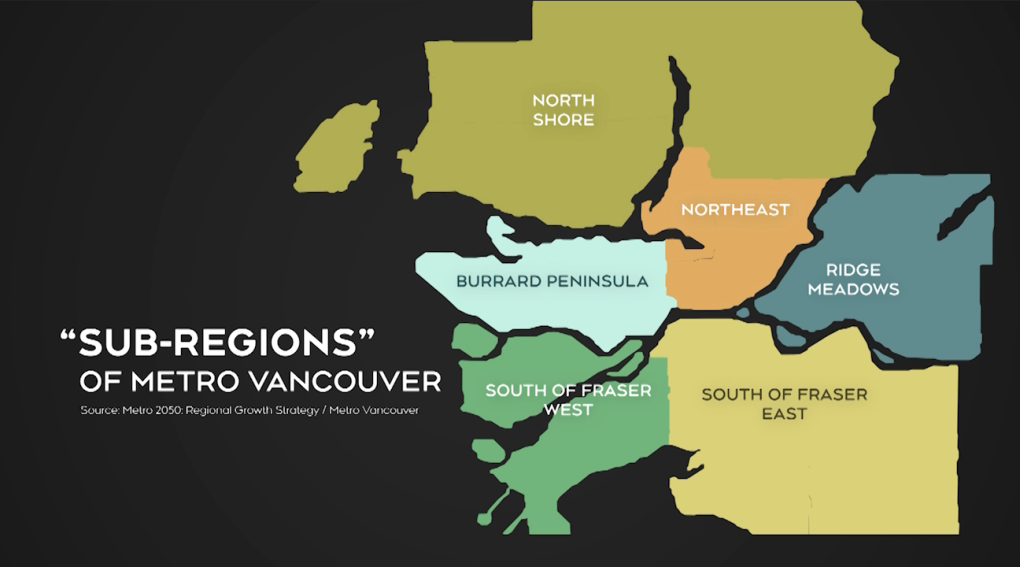 COULD THE PROVINCE FORCE THE ISSUE?

CTV News asked the municipal affairs minister about his government’s position on amalgamation, and he insisted the province’s role isn’t to weigh in on these issues, even though his counterparts in Ontario continue to tinker with the governance structure of its largest metropolitan region.

“(The municipal election) is a good time for people to talk about questions of how services are delivered and how they're organized as communities,” said Nathan Cullen. “I'd like to see the initiative come from voters who live there as to what it is that they want and whoever forms the next councils in a lot of the towns we're talking about, I’m sure they'll bring forward the views and wishes of their citizens.”

That surety may be misplaced.

In 2018, voters in the District of North Vancouver voted nearly 80 per cent in favour of pursuing re-unificaiton with the City of North Vancouver after years of study. Like Maple Ridge and Pitt Meadows, they already share an RCMP detachment, but in the four years since, the current council has not made any moves to advance amalgamation.

“This is essentially something that requires the councillors to vote themselves out of a job,” pointed out Canseco. “That’s not something that we've seen happening in any single council, regardless what the residents might be thinking.”

Last week, NDP leadership frontrunner, David Eby, angered some mayors when he proposed sweeping changes to housing regulations that he intends to impose on municipalities if he becomes premier, raising the possibility he could be willing to act more decisively than his predecessor on issues impacting B.C.’s biggest cities.

The federal government is reviewing an RCMP equipment contract with a company that has ties to China's government, the prime minister said Wednesday.