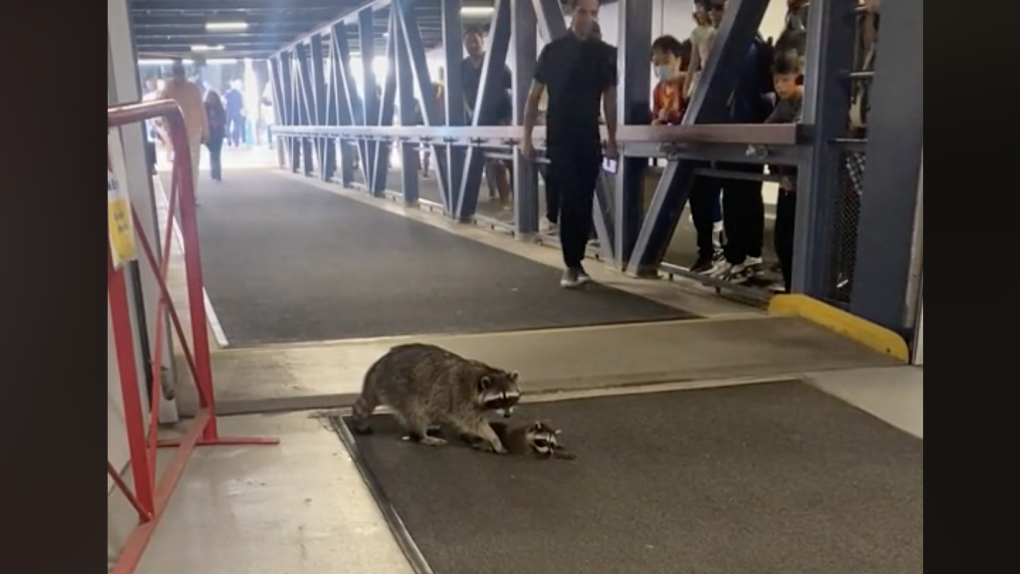 The video, posted by Cynthia Robbyn, has garnered more than 310,000 "likes" so far (Photo: @cynthiarobbyn/TikTok).

Video showing a mother raccoon rescuing her baby at the SeaBus terminal on the North Shore earlier this week has since gone viral on TikTok.

It shows the tense moments after a baby raccoon fell down from the ceiling, causing onlookers to gather around the animal.

In the video, the baby raccoon appears very still at first, but then starts to cry. That's when the mother raccoon comes to her baby's aid.

"That told me like, OK, you just knocked the wind out of yourself," Robbyn said in another TikTok video.

According to TransLink, the raccoons found their own way out of the terminal.

"The pair left beneath the ramp soon after," TransLink said.

@cynthiarobbyn Walking toward the Sea Bus a baby raccoon dropped down beside me from above & for a bit I thought they were really hurt. Seems s/he just knocked the wind out of themselves. Then s/he began to cry…sounding much like a human baby. Momma to the rescue though. ❤️ I kept my distance but stuck around not sure what to do as people were walking by. I felt okay to leave when workers asked people to keep the area clear & move along. How frightening for these animals. #seabus #northvancouver #racoon ♬ original sound - Cyn

US knocked out of World Cup, loses to the Netherlands 3-1

Memphis Depay and Daley Blind scored in the first half and Denzel Dumfries added a late goal as the Netherlands eliminated the United States from the World Cup with a 3-1 victory Saturday that advanced the Dutch to the quarterfinals.