SURREY, B.C. -- As soon as Fraser Health’s “Vax-a-thon” clinic opened Saturday at 11 a.m., people began lining up to get their shots.

“I wasn’t expecting this long a line-up, but it’s probably good news that there’s this many people wanting to get the shot,” said Kevin Langley, who was waiting in line for this second dose of a COVID-19 vaccine.

The Vax-a-thon runs for 32 hours straight at Surrey's Guildford Recreation Centre, and Fraser Health hopes to give out 7,000 doses.

“If we have people that want to come in and get a first dose, and we’re getting close to that number, we will make sure that we don’t turn any first-dose people away,” said Christine Mackie, co-lead for the Vaccine Co-ordination Centre for Fraser Health.

“We have a plan for 7,000 doses. If we need more vaccine, we will get more vaccine especially for first-dose folks.”

Anyone interested can come by. No appointments are necessary. The idea is to make sure anyone who wants a vaccine can get it.

“If it gives the opportunity for people who haven’t been able to get in because of life circumstances, then fantastic,” said Mackie. “Maybe people will have that time at midnight and one in the morning.”

Two members of the Vancouver Symphony Orchestra were performing Saturday afternoon for the crowd outside the clinic.

“That was the first time we played for people in probably a year,” said Larry Knopp, principal trumpet for the orchestra. “The one thing we’ve been missing is playing for large audiences.”

He and Vincent Vohradsky, the orchestra’s second trumpet, played a duet until they were both invited to get their second doses.

“This is actually a little bit of a surprise,” said Vohdrasky. “We were playing out front and they said that if we wanted we could get on the list to get our second dose today and I was like, ‘Sign me up.’”

He said the orchestra has done many virtual performances on the concerthall.ca platform, but it’s really looking forward to playing for people in a live setting again.

“It’s really great to see how many people are out there,” he said. “Just society resuming some sort of normalcy is what I’m most looking forward to.”

Knopp said he’s hoping to be back on stage in just a few months.

“I’m hoping in September enough people will be vaccinated (and) we can have regular concerts at the Orpheum,” he said.

At the Vax-a-thon, there are more events planned to keep everyone energized throughout the night, including a DJ, masquerade and other performances.

“We wanted to wrap some fun around this,” said Mackie.

On Sunday, for Father’s Day, the team is encouraging families to come get their vaccine together.

“If you want to come in with the kids, whoever needs to be done, we’re here to deliver those first doses and keep driving those immunization numbers up,” she said.

Each of B.C.’s health authorities has a vaccination rate above 60 per cent for first doses. 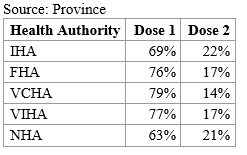 Mackie said working on the vaccine program will be “the privilege of (her) career.”

She said everyone who arrives at the Vax-a-thon is excited and positive, giving great feedback to staff as well.

“From the beginning of this, it’s just an absolute pleasure,” said Mackie. “The staff have had an exceptional amount of praise and it’s just such a nice feeling for them to be able to help their communities.”

At least 143 flights with COVID-19 on board passed through B.C. airports in July

Impact of Delta variant: Number of COVID-19 cases doubling every 7-10 days in B.C.

New York restaurants, gyms require proof of vaccination. Could it happen in B.C.?