This map shows you how much it's snowing throughout B.C. 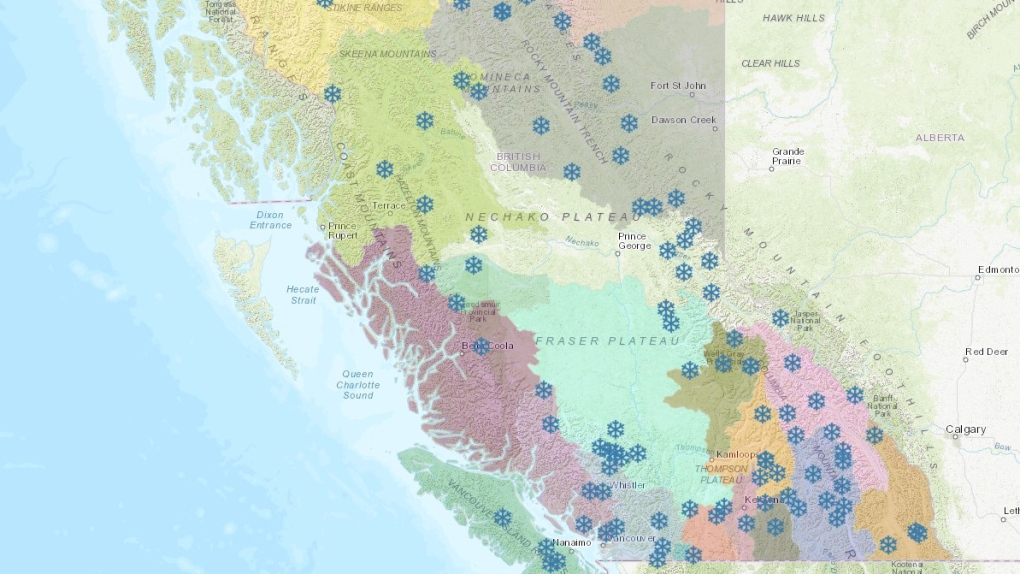 Data on the map is collected hourly, showing snow depth, precipitation and air temperature in near real time. (Province of BC)

VANCOUVER -- Snow-enthusiasts looking for fresh flakes can now make use of an interactive map operated by the province to see how much has accumulated throughout B.C.

Data on the map is collected hourly, showing snow depth, precipitation and air temperature in near real time. It also shows historical averages.

Those numbers are gathered from stations run by staff at the Ministry of Environment, BC Hydro, Rio Tinto Alcan and Metro Vancouver.

The online, interactive graphic features snowflake icons that are scattered across a map of the province. Each flake represents a snow centre and includes its current and historical data.

For those wanting a closer look at snow conditions in B.C., the province also operates satellite cameras that update at least once per day.

Some of those cameras might show parts of B.C. getting a dump of snow over the next few days as several regions in the eastern part of the province are under snowfall warnings.

As of Tuesday morning, Boundary, Kinbasket, Kootenay Lake, McGregor, North Columbia, West Kootenay and Yellowhead were all under Environment Canada snowfall warnings. In some places 15 to 25 centimetres is expected overnight and on Wednesday.

Arrow Lakes, East Columbia, West Columbia and Shuswap all had winter storm warnings, where up to 40 centimetres of snow is expected.

"Weather in the mountains can change suddenly resulting in hazardous driving conditions."

Last week, Metro Vancouver had a chance of flurries in its forecast, but now in the week ahead temperatures are expected to stay above freezing with several days of rain predicted.

On the North Shore, Grouse and Cypress mountains opened last weekend and they might see a few centimetres of fresh snow this week.