This kale salad blend sold in B.C. could make you sick, CFIA says 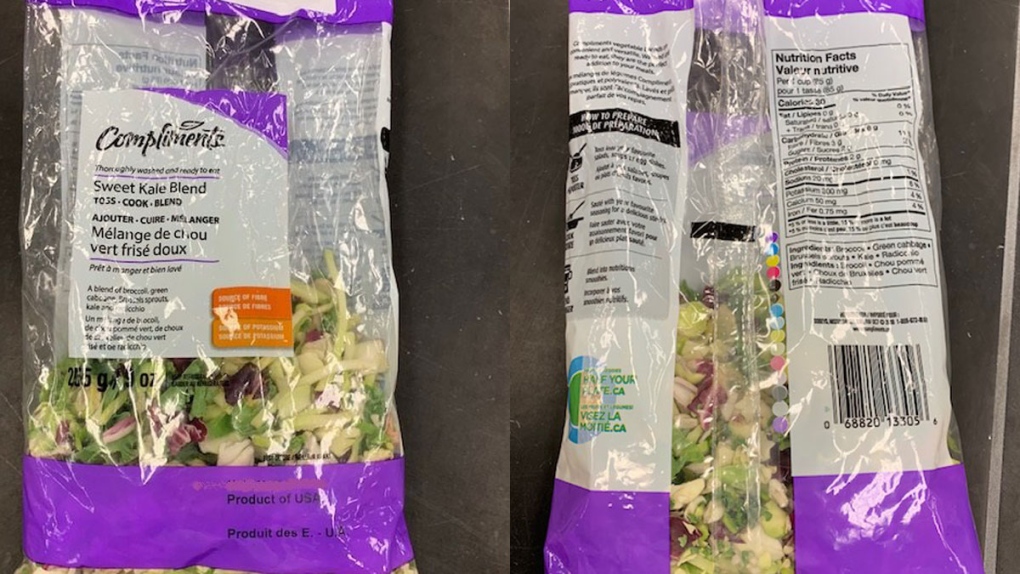 A kale salad blend sold in grocery stores across Canada is being recalled due to listeria. (CFIA)

VANCOUVER - A kale salad blend sold in grocery stores across Canada is being recalled due to listeria.

The recall issued earlier this week by the Canadian Food Inspection Agency says the Compliments brand bagged salad mix was sold in B.C.

It was also sold through Sobeys in Alberta, Saskatchewan, Manitoba, Ontario, New Brunswick, Nova Scotia, P.E.I. and Newfoundland and Labrador.

The company says the product was removed from its shelves Wednesday, but those who bought the product before are told to "destroy" it and bring a receipt back to the store.

They'll be entitled to a full refund, Sobeys says.

The recall was prompted by CFIA testing, and no illnesses have been reported. The CFIA continues to investigate, and it's possible other products may be recalled as a result.

Food contaminated with listeria monocytogenes often does not look or smell spoiled. Those who've consumed the bacteria may experience symptoms including vomiting, fever, muscle aches, severe headache and neck stiffness.

The elderly and those with compromised immune systems are the most at risk. Pregnant women may only experience mild, flu-like symptoms but the infection can lead to premature delivery, infection of the newborn or even stillbirth, CFIA warned.

"In severe cases of illness, people may die."