'This is a wild ad': Craigslist post for B.C. rental full of illegal demands, advocates say 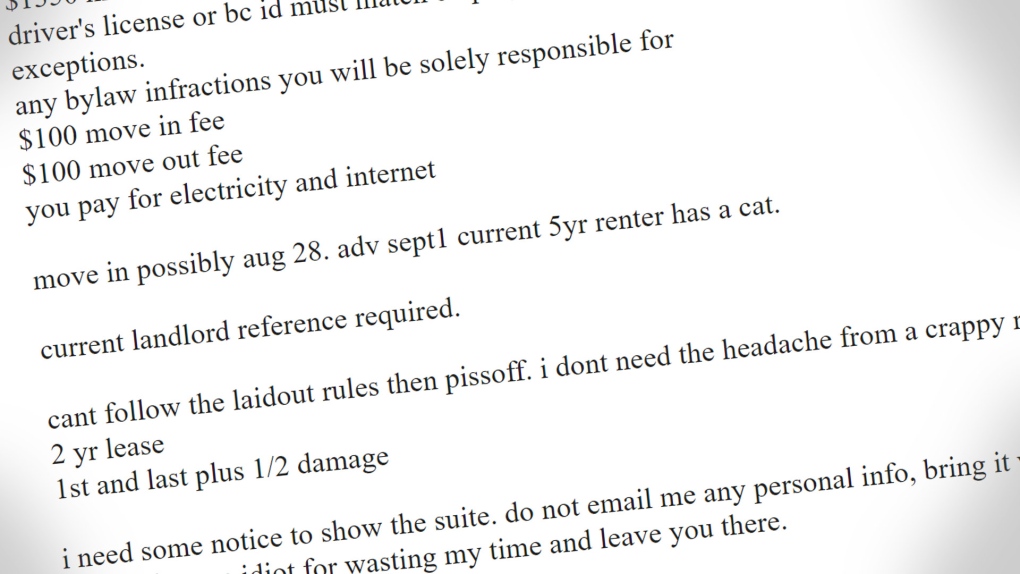 VANCOUVER -- A listing for a B.C. rental home that encourages prospective tenants to "piss off" if they object to a laundry list of rules and requirements goes too far, according to housing advocates.

The Craigslist post was shared on Reddit this week, prompting a wave of jokes and comments, but the Tenant Resource and Advisory Centre said it also highlights a number of demands that landlords in the province aren't actually allowed to make.

The ad promises a one-bedroom home in New Westminster for $1,350, rent that's well below average for a property in Metro Vancouver, but it comes with several strings attached, including that applicants have been employed at the same company for at least four years – "no exceptions."

The listing also indicates the tenant or tenants will be charged a "move in fee" of $100 and a "move out fee" of $100, and forced to pony up the first and last month's rent – on top of a damage deposit.

Anyone who doesn't like the demands is told to pound sand.

"Can't follow the laid out rules then piss off," it reads. "I don't need the headache from a crappy renter. Current tenant loves it here and you will too."

CTV News has not been able to verify that the listing is legitimate, as it was flagged for removal from Craigslist, meaning there's no way to contact the person who originally posted it.

The person who shared the post on Reddit told CTV News it reminded him of the tenant horror stories that sometimes emerge in Vancouver's overheated housing market, but that the unapologetic tone was still surprising.

"All the aggression, you don't see that in a lot of sales pitches," said Chris, a White Rock resident who didn't want his last name published.

Beyond being unusual, some of the requirements set out in the post are illegal, said Zuzana Modrovic of the Tenant Resource and Advisory Centre.

"This is a wild ad," said Modrovic. "I wouldn't want to live here, mostly because this landlord seems like they would be rather intrusive."

Landlords can't refuse to rent their properties to people who haven't been at their job for a specific length of time, Modrovic said. Doing so would violate B.C.'s Human Rights Code, which bars discrimination based on "lawful source of income."

It's also illegal to charge tenants a fee for moving into or out of a home, unless the landlord is passing on a fee required under strata bylaws.

People who find housing ads with illegal requirements can report them to the enforcement unit at the province's Residential Tenancy Branch, but TRAC warned that people shouldn't hold their breath waiting for action as the team is busy and small.

Modrovic did recommend that renters trust their gut when considering a living situation that seems like trouble.

"Practically speaking, if you're reading a listing and you think the person writing it is kind of unreasonable, then you might not want to have an ongoing legal relationship with them," she said.