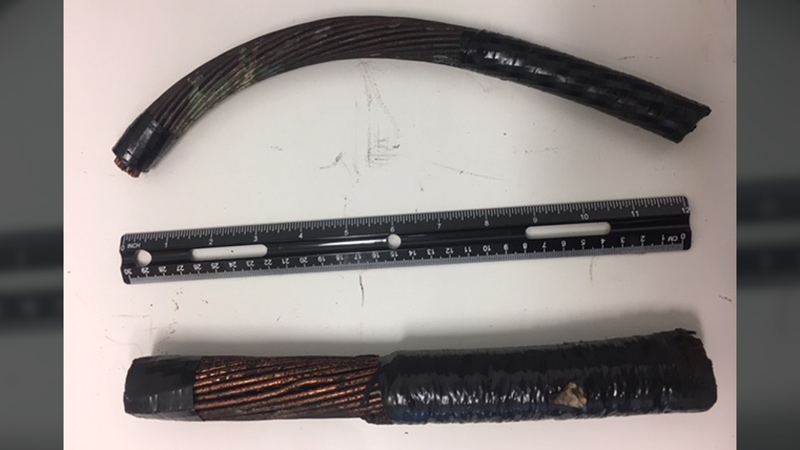 Cut pieces of trolley wires are seen in a photo from Metro Vancouver Crime Stoppers and Transit Police.

Police are asking the public for help to catch a thief or thieves targeting an unusual but valuable item: copper trolley wires.

"Metal theft in Vancouver has been taken to new heights recently – about as high as the trolley wires over your head," the Metro Vancouver branch of Crime Stoppers said.

In a statement released with transit police, Crime Stoppers said someone has been cutting and stealing live 600-volt wires used to power transit buses.

Officials believe the thieves may be dressing as utility workers to avoid suspicion, and are likely using sophisticated equipment and machinery. The thefts typically occur overnight, they said, and thieves may be using unmarked vehicles.

Approximately two dozen of the thefts have been reported in Vancouver alone in the last two years, officials said. It costs as much as $50,000 to replace the stolen sections of wire.

Not only is the crime costly and an inconvenience to transit takers, but it's dangerous to both the thieves and the public.

Last month, thieves left cut, live wires dangling just a few feet above the sidewalk near West 7th Avenue and Blanca Street. The wires were spotted by teenagers who reported the danger.

"In addition to the criminal act of stealing the metal itself, it's just plain deadly to be meddling with high-voltage wires," said Metro Vancouver Crime Stoppers executive director Linda Annis.

"Transit police need to find the culprits and put a quick end to this."

Anyone who sees a person cutting, dragging or chopping wire, or using unmarked vehicles during the night, is asked to contact Crime Stoppers at 1-800-222-8477 (TIPS). Anonymous tips can also be left by texting "BCTIP" and your information to 274637 (CRIMES), or be left online.