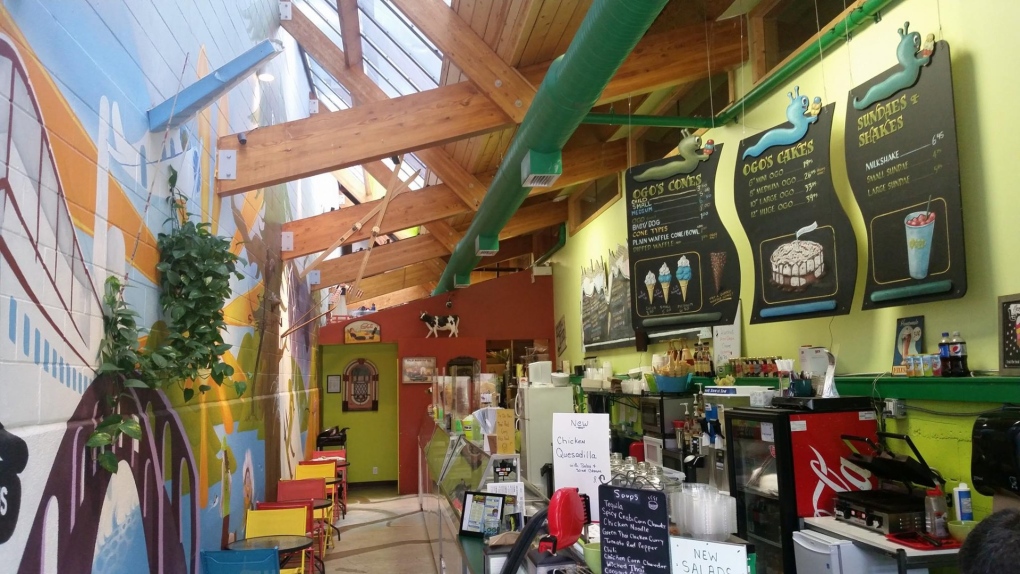 Ogo's Ice Cream & Food in Penticton is seen in this photo from the shop's Facebook page.
Vancouver -

Police in Penticton are looking for witnesses after a local ice cream shop was robbed early Wednesday morning.

The incident happened shortly before 6:20 a.m. at Ogo's Ice Cream & Food on Main Street, according to a news release from Penticton RCMP.

The owner of the business was preparing the store when two men entered and demanded she open the cash register, police said.

During the robbery, one of the men assaulted the 70-year-old business owner with a weapon, police said. They did not say what type of weapon the assailants used, but Castanet News spoke to the woman's daughter, who said it was a hammer.

The men took the entire cash register, as well as "food items," police said, adding that officers from multiple units, including police dog services, responded to the scene.

Paramedics treated the victim at the scene for serious, but non-life-threatening injuries, according to RCMP.

Mounties are now looking for two suspects. They described one as wearing a black mask, grey hooded sweater, grey sweatpants and white, high-top runners. The other one was wearing a black mask and black sweatshirt, police said. They did not provide physical descriptions of the men, who were wearing ski masks and gloves, according to Castanet.

“Many local RCMP resources have been assigned to investigate this serious incident," said Penticton RCMP spokesperson Const. James Grandy, in the release.

"There was heavy pedestrian traffic at the time, and we encourage anyone who may have seen, heard, or captured on video anything which may be related, to contact us directly."

Two Canadians detained in late 2019 who were allowed to return to Canada in a prisoner swap were released on bail for health reasons, China's Foreign Ministry said Monday.

Germany's centre-left Social Democrats won the biggest share of the vote in a national election Sunday, narrowly beating outgoing Chancellor Angela Merkel's centre-right Union bloc in a closely fought race that will determine who succeeds the long-time leader at the helm of Europe's biggest economy.

Businesses, schools and cities to observe National Day for Truth and Reconciliation

Businesses, cities and schools across Canada are preparing to follow the federal government's decision to observe the day, in some cases stepping up because provinces won't.

Find your sleep 'sweet spot' to protect your brain as you age, study suggests

How long older adults sleep could affect their brain health, according to a study published Monday in the journal JAMA Neurology. Disrupted sleep is common in late life, the study authors wrote, and associated with changes in cognitive function.

Canada has now fully vaccinated 79.95 per cent of the country's eligible population.