'They're not alone': Surrey psychiatric unit for children and teens offers unique support

It’s a space punctuated with colour: from the orange doors and cheerily vibrant furniture, to murals evoking gentle scenes of nature on the walls.

In pictures provided to CTV News Vancouver, the unit inside Surrey Memorial Hospital appears bright and open: a design that’s very intentional, as it greets families going through what can be dark times.

The Child and Adolescent Psychiatric Stabilization Unit has been operational for just over two years. By now, hundreds of young patients and their parents have walked through its doors.

The age range for the unit starts at six and runs up to 17, but the average age of patients at CAPSU is 15.

The one thing they share in common when entering the unit: all are experiencing a mental health crisis, such as psychosis, severe anxiety or depression.

As of January, young patients and their families have also benefitted from a unique type of support, the combination of which is a first in B.C.

Among the clinical team members, including doctors and specialists, there are also people who have first-hand experience living with mental illness in a family and being in a mental health unit.

Tammy Music is one of the so-called parents in residence at the unit.

“When you’re in crisis with a youth who’s experiencing a significant mental health challenge, you feel like you’re so out of control and as a parent, you’re so helpless,” Music said.

“I know what it would have meant to me to have someone with a lived experience being able to share their perspective and give me a sense of hope.”

Music said when she was in a similar situation with her son years ago, she felt disconnected from their treatment team.

But at CAPSU, she said, parents are kept very involved.

She helps families navigate the clinical process and provides emotional support, from the perspective of someone who understands what it’s like.

“That’s what we hear back from parents that we connect with, that that piece alone is really helpful for them just to see that they’re not alone,” she said.

Courtney Harvey, 25, is a youth in residence at the unit.

She said she supports the young patients in simple ways, such as participating in activities with them and just talking to them.

“I expected to talk about illness a lot, but it seems like I talk about anything but,” said Harvey, who is taking the prerequisites to study social work.

“I think it’s refreshing for them to say, 'This is who I am aside from my illness,'" she said, adding sometimes they’ll play games, watch movies, or colour and do puzzles, depending on their ages.

Child psychiatrist Dr. Shruthi Eswar said the 10-bed unit was specifically designed not to look like a hospital. She said the space is open concept, with private rooms. There’s even a sensory room to help with de-escalation.

“We wanted to make sure that it was welcoming and it was safe and secure, and not clinical and scary,” she said. 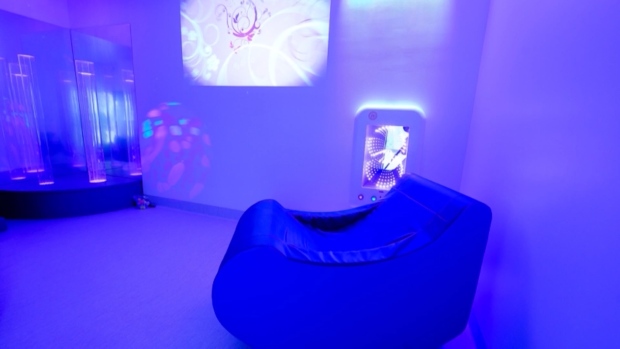 Dr. Eswar said by the end of the unit’s first year, about 350 patients passed through and they've seen similar numbers in the second year.

“Intervening early ensures that the right supports are available at the start of a problem, rather than it being escalated and then having to struggle with that,” Eswar said, calling the unit "very vital and critical."

As for Harvey, she said she definitely sees a change in young patients as time passes during their stay in CAPSU.

“I can definitely see people coming out of their shell,” she said. “They tend to open up, they tend to joke more, and they tend to socialize or participate in groups.”

She said it's the result of the support the youths receive in a space specially designed to make children and teens in crisis feel safe and calm.

“I think I try to combine, like saying you know, this is not permanent, with, I appreciate that this is real right now,” Harvey said, calling a mix of validation and a reminder that things will change.

Families are referred to CAPSU from all over the Fraser Health region, usually from emergency departments. Staff at the unit also include social workers, youth care counsellors, occupational therapists, nurses, and psychiatrists