'They're being ripped apart': Families heartbroken by decision to close Surrey group home

SURREY, B.C. -- A government-funded group home in Surrey that houses vulnerable adults is closing its doors and the clock is ticking to find new accommodations.

Linda Aubert said she's devastated that her brother, Ronnald, is being forced to leave a loving home.

"These five people have formed a family and now they're being ripped apart – we're terrified," she said.

Croydon Villa houses five adults with disabilities. In August, Community Living B.C., a Crown corporation that holds the purse strings for supports and services, announced the group home was going to close next summer.

"They have not been transparent with us – we still don't know why Croydon Villa is closing," said Aubert.

Randy Schmidt, a spokesperson for CLBC, said the decision on the closure is out of their hands.

"It's just on rare occasions that we do have service providers who will be in a position of retiring and that's the situation here," he said.

But some families don't believe that reason and said they aren't getting the full story.

"If that was the case, that they were retiring, we would cope with that. But we also know that Aurora (service provider) would not cut it off at a certain date," Aubert said.

Aurora Salem, a long-time care provider, would not confirm to CTV News that she planned to retire.

Instead, she deferred questions to the families.

Schmidt said Salem's contract with CLBC was up for renewal in July 2020 and there were some issues brought up.

Some families said they're confused as to what improvements needed to be made.

Barb Andrews' brother, Bill, has been living in Croydon Villa since it opened its doors 25 years ago.

His sisters called the group home "a piece of heaven.” 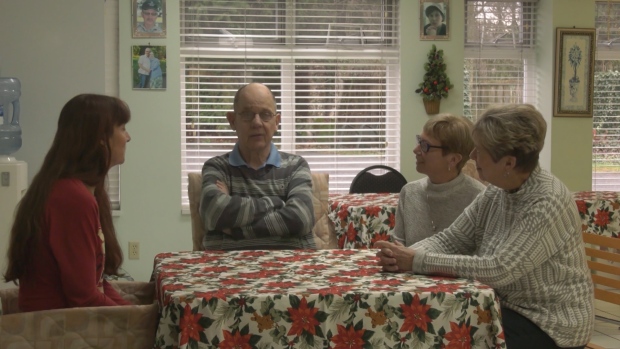 "It's so well run, so well-loved. I don't see how there could be big problems here – I really don't," said Andrews. "Some of the answers we get from them are not true. We've been lied to. It's just we can't trust anything they say anymore."

“Having to move is stressful and I appreciate the concerns of these families and their loved ones," wrote Simpson in an email statement. "CLBC works with its group home providers in order to ensure that the best possible home is being provided for some of BC’s most vulnerable people. I know that they are doing what they can to make this transition as smooth as it can be.”

The Andrews sisters said they've lost confidence that CLBC can find a suitable home for Bill.

On Saturday, Croydon Villa will hold its annual Christmas dinner, and this time, it will be the last.