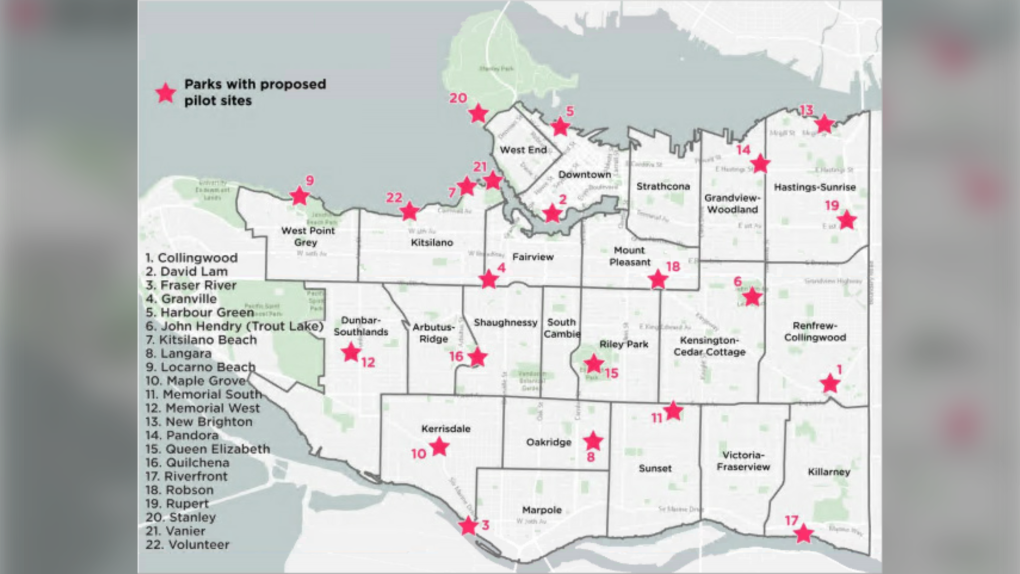 A staff report prepared in advance of Monday's meeting lists 22 sites spread throughout the city as viable options, noting that there were some neighbourhoods that didn't have any parks that met the "selection criteria." (Vancouver Park Board)

VANCOUVER -- The Vancouver Park Board is scheduled to consider a revised and expanded plan for allowing drinking in city parks at its meeting Monday night.

The board had been considering a pilot program for allowing alcohol consumption in certain parks since before the COVID-19 pandemic began, but the topic took on greater urgency as the need for physical distancing and safe outdoor spaces for socializing grew.

The initial plan called for drinking to be allowed in designated areas in 10 parks around the city, but members of the park board asked staff earlier this month to expand the program, with an eye toward including one park in each of the city's 23 neighbourhoods.

"The idea is to discourage folks from driving across town to have a drink," said park board chairperson Camil Dumont at the time. "We want folks to just be able to have a glass of wine with their picnics, ideally in their own neighbourhood."

A staff report prepared in advance of Monday's meeting lists 22 sites spread throughout the city as viable options, noting that there were some neighbourhoods that didn't have any parks that met the "selection criteria."

The staff report adds the following 12 parks to the list:

According to the staff report, the revised list means that four Vancouver neighbourhoods – Downtown, Hastings-Sunrise, Kerrisdale and Kitsilano – would have multiple parks where consuming alcohol is allowed.

Five other neighbourhoods – Marpole, Shaughnessy, South Cambie, Strathcona and Victoria-Fraserview – would not have any parks with designated drinking areas under the revised plan.

If the park board approves it, the pilot program could begin as early as mid-August and would continue until Oct. 12, according to the staff report.

Drinking would be allowed in designated areas of the parks in question between the hours of 11 a.m. and 9 p.m.