Seniors David and Doreen Crozier never thought their lives could change so dramatically in a single day.

“I didn’t actually think I would be homeless at 76 years of age,” said Doreen.

The Croziers are among more than 200 Lytton, B.C., residents still scattered around the province almost a year after a wildfire swept the village.

The Croziers have been living at Camp Hope.

It’s a place normally used for church retreats and summer camp, but took in evacuees after the devastating fire.

Doreen was still inside her home when it caught fire on June 30, 2021. She said the only thing she got out was her cat.

The couple’s truck also caught fire and her husband, David Crozier, suddenly found himself in a burning vehicle.

“I could see nothing and I was panicking and I did lucky enough get the handle on the door, got the door open and the truck exploded,” he recalled.

He was lucky to suffer burns only to his arms.

The couple then made a harrowing escape from Lytton as the flames consumed the community.

“There was no time – there was minutes,” David said.

“It was total inferno on Highway 1, both sides by then."

Twelve months later, the fire is still tough to talk about for the couple. 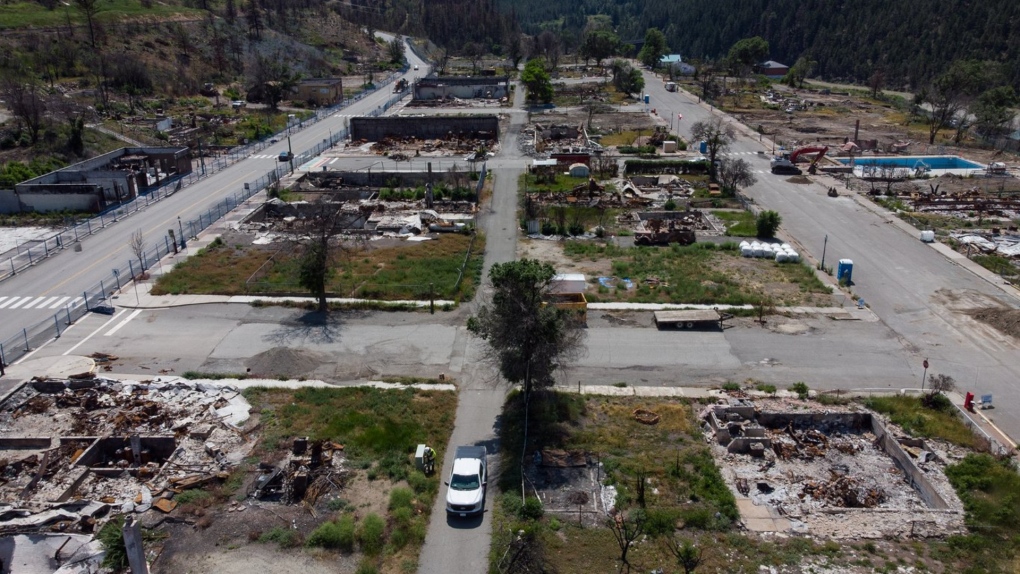 Structures that were destroyed by wildfire are seen in Lytton, B.C., on Tuesday, June 14, 2022. The fire-ravaged community of Lytton, B.C., will get $21 million from the provincial government to help it rebuild essential infrastructure and services. THE CANADIAN PRESS/Darryl Dyck

“Everything comes through your head about the fire. Where you going to live? Will your house be rebuilt?"

The pain of that day and the danger still haunt other Lytton evacuees as well, including Alphonse Adams.

“I think about it, what could happen if that fire came through and everybody was sleeping. That’s what I keep having nightmares about,” he said, wiping away tears.

Many Lytton evacuees are having a difficult time shaking the past, and remain uncertain about the future.

“I need a place to stay there and there’s nowhere for me to go,” said Adams, who is also living at Camp Hope.

At one point, the camp housed more than 65 displaced Lytton residents. Now there are just six.

Long-time Lytton resident Mona Croston, 85, has been living in a Merritt motel for months. It’s the eight place she’s stayed since the fire burned her home.

She had insurance and plans to build a new home.

However, many residents were uninsured, including the Croziers.

They don’t know if they will ever be able to own their own home again.

For now, they’re grateful they can stay at the camp.

“They have told us we can stay here as long as necessary so we just have to play it by ear,” she said.

A widespread power outage in Toronto causing major disruptions in the city was likely caused by a large crane striking a high-voltage transmission line, officials say.

A study out of the United Kingdom’s University of Leeds reports women who don’t eat meat are 33 per cent more likely to break their hips later in life.