There are 'reasonable concerns' about murder conviction that jailed man for 25 years, court hears 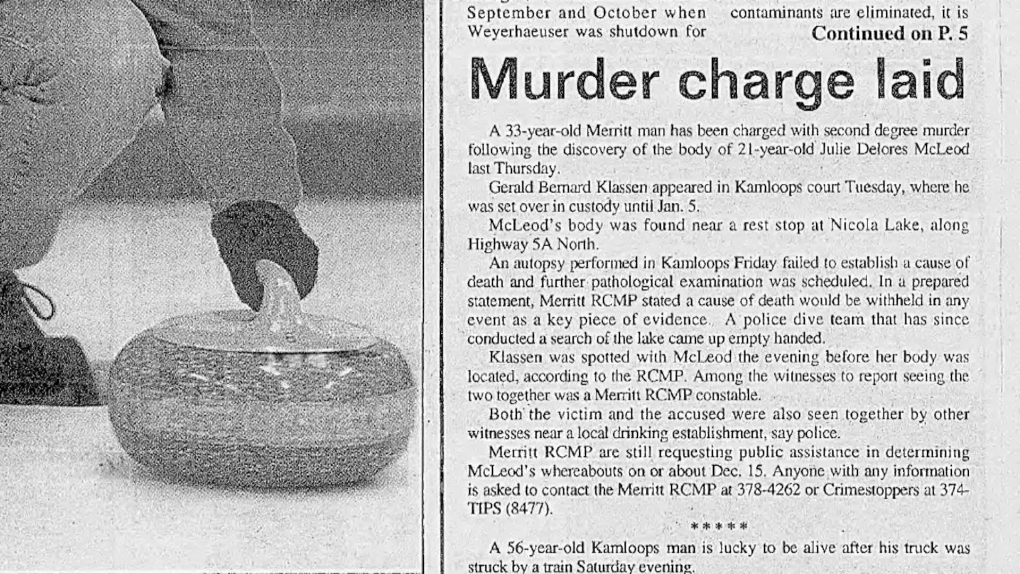 A headline in the Kamloops This Week newspaper reports Gerald Klassen has been charged in the 1993 death of 21-year-old Julie McLeod.

VANCOUVER -- A first-degree murder conviction that sent a B.C. man to prison for 25 years is now in doubt, CTV News has learned.

Lawyers told the B.C. Supreme Court Tuesday that the federal minister of justice has agreed there are “reasonable concerns” about the conviction of Gerald Klassen for the murder of 21-year-old Julie McLeod in Merritt in 1993.

Klassen, now 60 years old, is applying for bail pending a review of the conviction by the minister that was sparked by the discovery of problems with the physical evidence, according to his lawyer, Ian Donaldson.

“The most important evidence was a pathologist (who indicated) the deceased was badly beaten. The judge said that to the jury. Since then, four other forensic pathologists have looked at this. None of them concluded she was beaten. It could have been an accident. And if you give any weight to any of that, there was no crime,” Donaldson said.

The doubt was unearthed after a plea by Klassen to the UBC Innocence Project, which gives students course credit as they review cases after convictions.

“Certainly the evidence of the pathologists indicated that they strongly disagreed with the findings of evidence at trial – and the conviction rested almost entirely on the pathologist,” said Innocence Project co-founder Tamara Levy in an interview.

Klassen himself appeared by video link, wearing a blue shirt and sitting in a darkened room in Mission Institution, waving his hand occasionally to let the court know he could hear the proceedings.

A 1997 judgment from the B.C. Court of Appeal in the case says on Dec. 16, 1993, McLeod’s body was found partially submerged and partially undressed at the end of a boat ramp on the shore of Nicola Lake. An autopsy found she had died because of facial trauma, intoxication and hypothermia.

She was last seen alive with Gerald Klassen in his car on the previous evening, when they bought beer from a “clandestine supplier."

Klassen, then 35, maintained in the investigation that the pair drove to Nicola Lake, had consensual sex in his car, and then there was a dispute between them and he pushed her from his car and she hit her head, the judgement says.

“He said that she was still conscious however and that when he offered to drive her home, she swore at him so he drove off and left her where she was,” the judgement says, adding that Klassen was back in his home by 11 p.m.

“From the time that i was first disclosed by him at an early stage of the investigation, until conviction, the appellant never resiled from his insistence that the sexual intercourse was consensual,” the judgement says.

His lawyers said Crown had not proved their case beyond a reasonable doubt. A jury convicted him in 1995. His appeal in 1997 — based on challenging the trial judge’s instructions to the jury — was dismissed.

After having reviewed the evidence, retired pathologist Dr. John Butt said that he didn’t believe the autopsy showed any fatal injuries that McLeod suffered.

“There was a very significant laceration inside the lip. That doesn’t kill you,” Butt said in an interview. The undressing could be explained by “paradoxical undressing,” which is where a person takes their own clothes off after becoming disoriented.

“My opinion was, reading it over, that this was an accidental death,” Butt said.

The court heard about the Correctional Service of Canada’s concerns about Klassen. Jason Strijack, a manager of assessments and interventions, told the court that psychological testing had resulted in a “high” public safety risk.

“The high public safety level means that we believe in the event of escape the public would be at a high level or risk,” Strijack said — a risk he didn’t believe could be managed in the community, saying Klassen would be better in a “community correctional centre.”

But Klassen’s lawyer, Ian Donaldson, pressed Strijack, saying if Klassen is innocent, his refusal to admit guilt would be a factor in him appearing to show no remorse for his alleged crime.

“We don’t have a box to tick in the forms that says ‘wrongfully convicted.’ We don’t have that box,” said Donaldson.

Strijack also testified that records showed Klassen was “not receiving charges, getting along and following the rules of the facility.”

There’s no information that Klassen planned to escape from the facility, and a search of his police file didn’t show any other crimes other than the first-degree murder, he said.