VANCOUVER -- The group who tried to organize a dance party on Vancouver's Third Beach Friday night were the only ones who turned out.

Five young men spoke to CTV News Vancouver, confirming they were the ones who placed posters around the city advertising the event this week, but they wouldn’t give their names.

The group started arriving at the beach just before 7 p.m., carrying a large speaker and a generator. An hour later they were waiting for an Uber Eats driver to bring alcohol.

The group set up on the northern end of the beach and started playing music. Park rangers passed by a number of times, but there was no need to shut the gathering down, given its small size.

Posters advertising the event started appearing in downtown Vancouver this week. The flyer included a QR code which directed people to a website, saying Third Beach is “the place to be this weekend.” People could also buy tickets for cover and drinks, even though it's illegal to drink alcohol at Third Beach.

Earlier Friday, Vancouver police said they would be monitoring the area.

"We are going to be having patrol units as well as our beach unit and our mounted squad who will be in the area and if any event should occur, we are prepared for it at this time," said Sgt. Aaron Roed, of the Vancouver Police Department.

The event had no approvals, and Roed says VPD were not told about it by organizers. Vancouver Park Board commissioner John Irwin says the board didn’t know about it either, until posters started appearing.

But despite the reaction from officials, the organizers said they had no regrets.

“It was kind of beneficial, to be fair,” one young man said. “It was bad, but it was good because we got so many followers.”

Late Friday night, the group’s Instagram account said the gathering had to be shut down and all tickets would be refunded. 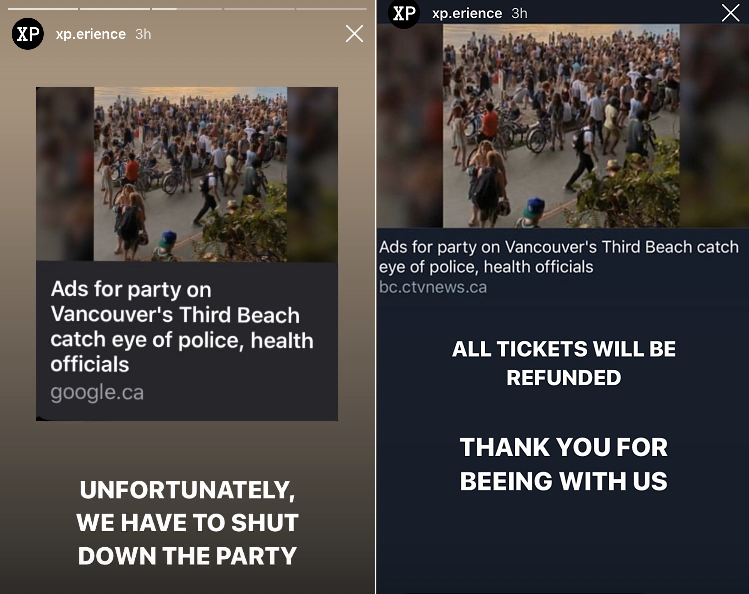 This comes more than a week after hundreds gathered at Third Beach for a drum circle with no physical distancing measures in place.

B.C. Health Minister Adrian Dix says people need to give their head a shake if they think it's OK to gather in large groups during the pandemic.