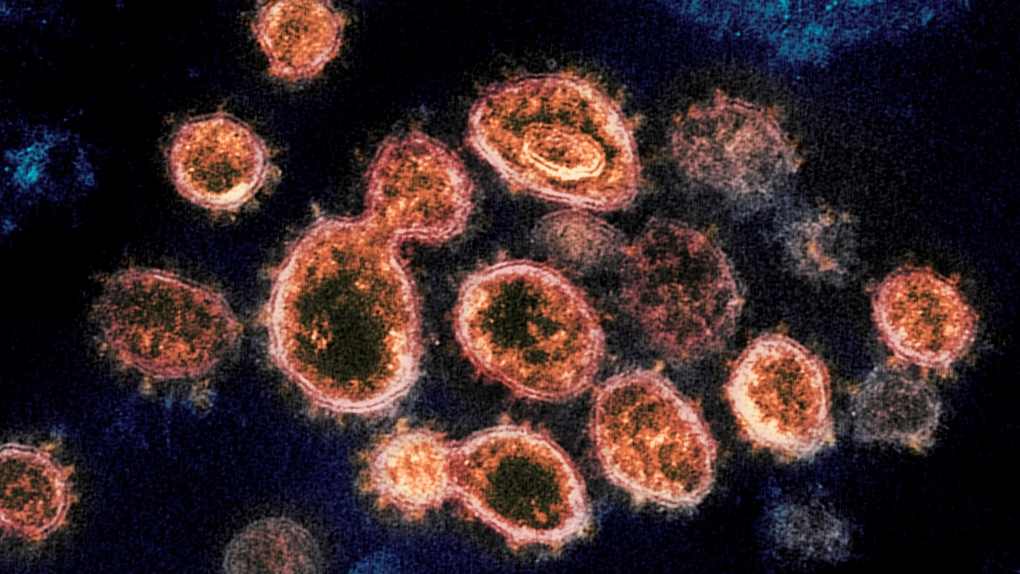 This 2020 electron microscope image provided by the National Institute of Allergy and Infectious Diseases - Rocky Mountain Laboratories shows SARS-CoV-2 virus particles which cause COVID-19, isolated from a patient in the U.S., emerging from the surface of cells cultured in a lab. (NIAID-RML via AP)

A team of researchers led by a British Columbia university has uncovered several new species of coronavirus, some of which were found in unexpected places such as animal dung.

The discoveries, outlined in a news release Wednesday from the University of British Columbia, were made by a former UBC post-doctoral research fellow, who led an international team in an analysis of ribonucleic acid (RNA) sequencing data.rib

"We’re entering a new era of understanding the genetic and spatial diversity of viruses in nature, and how a wide variety of animals interface with these viruses," Babaian said in the news release.

"The hope is we’re not caught off guard if something like SARS-CoV-2—the novel coronavirus that causes COVID-19— emerges again … The real goal is these infections are recognized so early that they never become pandemics."

The samples collected worldwide over a 13-year period included dung from several animals, as well as other sources, according to a summary from the school of the research published in the scientific journal Nature this week.

The research team phased the collection as coming from "every continent and ocean, and all kingdoms of life."

With the help of a "ridiculously powerful" supercomputer built by UBC and Amazon Web Services, the team said it found nearly 10 times more RNA viruses than were previously known.

The team also found nine new species of coronaviruses during study, which took 11 days and cost about $24,000.

As for what was learned, there were some challenges, the team wrote in the paper published in the journal.

"An important limitation for these analyses is that the nucleic acid reads do not prove that viral infection has occurred in the nominal host species. For example, we identified five libraries in which a porcine, avian, or bat coronavirus was found in plant samples," the team said.

The hope is this research, and the database created by the Serratus Project, will help "pave the way to rapidly identify virus spillover into humans," UBC said. The database can also be used to identify viruses impacting livestock, crops and endangered species, according to the school.

An example the 32-year-old gave was of a patient with an unexplained fever. He said that patient's blood could be sequenced, and the virus causing the fever could be compared to the Serratus Project database of existing viruses.

"You can now search through the database in about two minutes, and connect that virus to, say, a camel in sub-Saharan Africa sampled in 2012," Babaian said.

He called the research, which was sketched out on a napkin and started as a "fun" side project, the "most exciting scientific period of my life."

"There are two types of fun. Type 1 is smiling and fun. Type 2 is when you’re miserable while doing it but the memory shines, like rock climbing. In many ways Serratus is Type 2 fun. You just kind of have to believe it’s going to work out."