'The explosion felt like an earthquake': B.C. First Nation suing Enbridge asks for pipelines to be re-routed off reserve 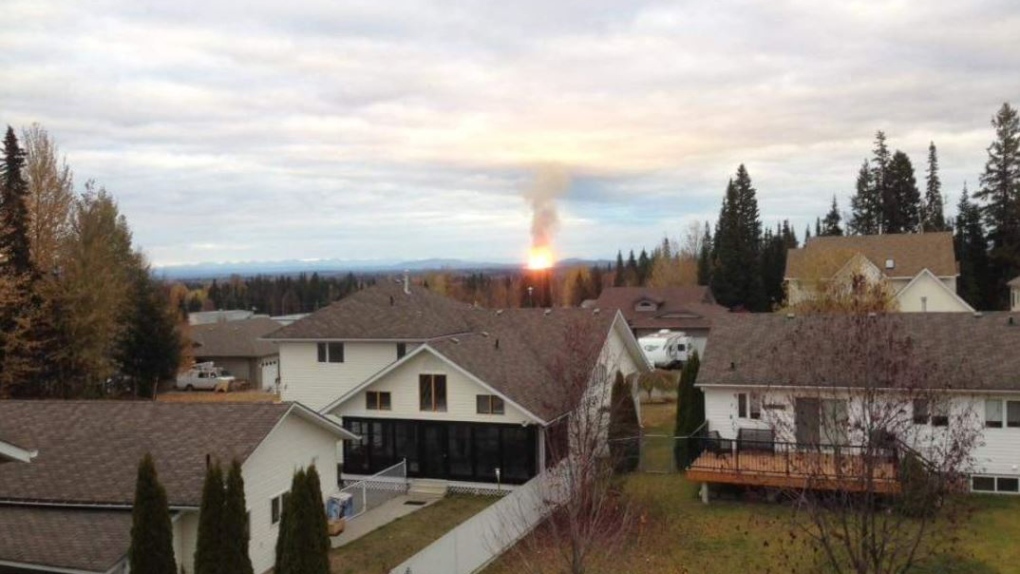 A pipeline explosion near Prince George, B.C. on Oct. 9, 2018 is seen in this social media image. (Jamie Rye / Twitter)
VANCOUVER -

A B.C. First Nation is asking the government to order pipelines to be re-directed off its land ahead of the three-year anniversary of an explosion.

The Lheidli T'enneh First Nation said at a news conference Tuesday that the nation has sent letters to both the federal and provincial governments making the request.

It's asking for the governments to order natural gas provider Enbridge to reroute the pipelines away from its reserve.

Dolleen Logan, the third chief of the LTFN since the explosion and fire in 2018, said the nation is still waiting for Enbridge to take the lawsuit seriously.

"Our members deserve better," she said. "They have patience, but I've finally lost mine. I'm tired of waiting for this, I'm tired of getting put on the back burner."

Three years later, there is still evidence of the damage caused that day, she told media.

Noting the upcoming Sept. 30 holiday, the just-established Truth and Reconciliation Day, she said Enbridge needs to "get with the reconciliation program."

In a statement in response, Enbridge said it values its relationship with the nation and is "committed to working with leadership and the community."

The company said it is happy to meet with the nation or government agencies to discuss safety concerns "or any other matter, including the small segments of pipeline that traverse their reserve."

In a brief statement, the provincial government confirmed it had received the correspondence and that it was being reviewed, but it noted that the pipeline in question is federally regulated.

The update comes amid a legal case between the LTFN and Enbridge related to an incident in October of 2018, when two pipelines exploded near the nation's Northside subdivision in the Prince George area.

"The explosion felt like an earthquake, shaking buildings and terrifying local residents who described the fallout from the eruption as pandemonium," the nation recalled in a statement Tuesday morning, ahead of the news conference.

The explosion and subsequent fire forced the evacuation of several homes in the rural community of Shelley.

At the time, Regional Chief Terry Teegee of the nearby Takla Lake First Nation told CTV News the noise sounded like a jet taking off, or a train crash.

"But then we looked out back and it was this massive ball of fire."

The province's Ministry of Environment later confirmed the incident involved a 900 PSI gas line operated by Enbridge. The gas line was shut down temporarily.

Later, the cause of the explosion was determined to be "stress corrosion cracking," which had been undetected but preventable, a regulator said.

An Enbridge subsidiary was fined $40,000 last year, following an investigation.

On Tuesday, Enbridge said the company undertook a comprehensive "pipeline integrity program" on its system in B.C., with the goal of improving safety.

"This was the most aggressive integrity program ever undertaken in B.C.," the company said.

Enbridge added it has been working with Indigenous communities in B.C. for more than 60 years, and is focused on maintaining those respectful relationships and engaging Indigenous groups.

The LTFN launched a lawsuit the following February, seeking damages from Enbridge for the impacts it says were caused by the explosion.

Enbridge proposed a settlement in the case, which was rejected by the nation earlier this year.