The Coquihalla is likely not closed when Google Maps says it is: province

The Coquihalla is likely not closed when Google Maps says it is: province 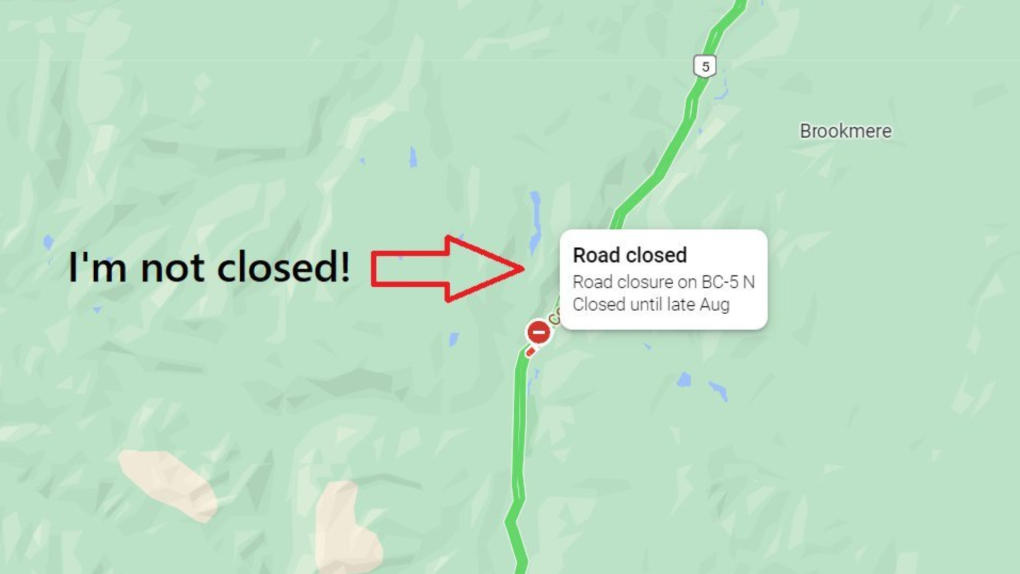 Google Maps keep incorrectly reporting closures of B.C.'s Coquihalla Highway. DriveBC tweeted this image along with a reminder that there are no closures in effect on Sunday, June 16.

For the fourth time in a month, DriveBC is advising people travelling between Hope and Merritt on the Coquihalla that the highway is open -- despite Google Maps saying it is closed.

"Google Maps is a great resource but it's been causing some confusion!" says a tweet Sunday from the account, which provides drivers with updates from B.C.'s Ministry of Transportation.

It was the latest in a series of similar warnings from the ministry about incorrect information being provided on the popular navigation platform.

"Apologies for errors being found on Google Maps, on an ongoing basis, that indicate closed roads and highways that are actually open," said one posted on May 29.

On June 10, a similar tweet described the information provided by Google as "decidedly incorrect and certainly not valid." Three days later, the agency posted saying the company has been "advised of their application's illiteracy regarding #BCHwy5, to no avail."

The province is reminding drivers that its website provides the most accurate and up-to-date information on conditions on the roads.

While the route is open, those travelling to and from the Interior have been warned to expect delays throughout the summer as the province continues to repair damage caused by last year's catastrophic flooding.

Highway 5 was closed for nearly two months, reopening to regular traffic in January. However, only temporary repairs were completed by that time.

With work on permanent repairs underway, some stretches will continue to see reduced speed limits and lane closures.

Anyone who needs to travel along the route is urged to check online for real-time updates on how construction is impacting traffic before departing.

Expect delays on the #Coquihalla this summer as we rebuild from major flood damage.
If delays are significant, we’ll do our best to make sure you know before you go, either via our overhead message signs or our travel advisory page: https://t.co/9M6ssIAntM pic.twitter.com/cl4Y2V56vw

A suspect already in handcuffs has allegedly managed to overpower a Toronto police officer and steal their SUV, sending police on a wild early morning chase.