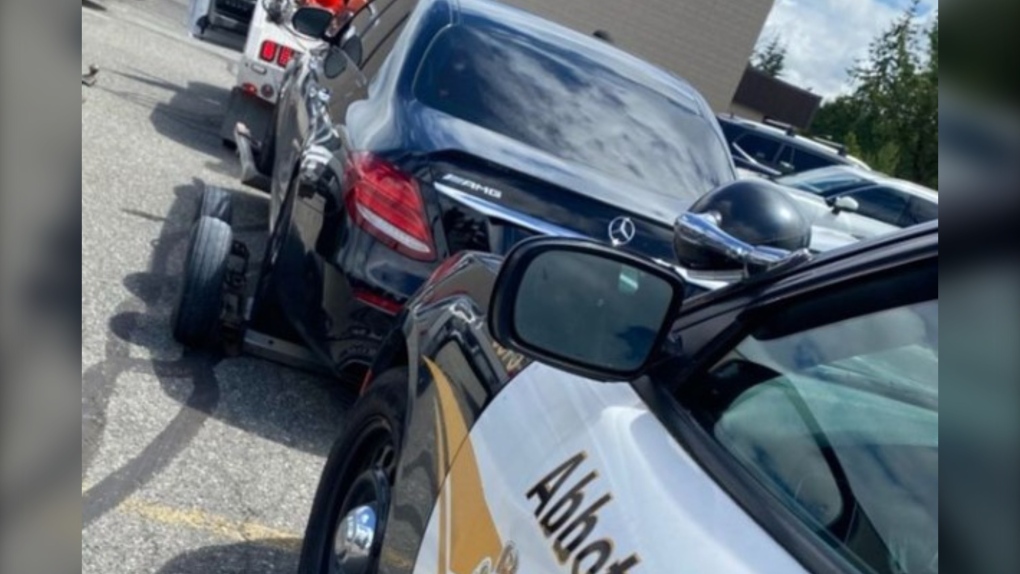 Abbotsford police a young driver was caught speeding near a school on Wednesday. (Abbotsford Police Department/Instagram)

A B.C. teen received a hefty fine and had his vehicle impounded after he was caught doing more than four times the speed limit near a school.

Abbotsford police said in a social media post the young driver was caught Wednesday doing 140 km/h in a 30 zone. A photo shared with the post showed a Mercedes-Benz hooked up to a tow truck.

Not only was the 18-year-old driver handed a $483 ticket, but police said his "prom vehicle" was impounded.

A hashtag used by the department also suggested the driver's licence is being reviewed.

Fines and other penalties in B.C. are based on how much over the speed limit a person is driving, among other factors including whether they were in a school or construction zone.

Drivers with one or more ticket for excessive speeding pay a driver risk premium, which is based on convictions and reviewed in three-year periods.

Additionally, drivers with their novice, or "N" licence who receive a driving prohibition have to restart the two-year novice stage before they can take their road test.

The House of Commons Public Safety and National Security Committee is set to meet today to discuss allegations of political interference in the 2020 mass shooting in Nova Scotia.

Canada's inflation rate slows to 7.6 per cent in July as gas prices fall

OPINION | Economists are forecasting a recession, how should you prepare?

Explosions and fires ripped through an ammunition depot in Russia-annexed Crimea on Tuesday in the second suspected Ukrainian attack on the peninsula in just over a week, forcing the evacuation of more than 3,000 people.

One-quarter of front line employees surveyed at Canada's border agency said they had directly witnessed a colleague discriminate against a traveller in the previous two years.

As heat waves become more common and extreme due to the effects of climate change, the data centres that provide the backbone for the online services the public relies on are at risk of overheating.

Some energy experts warn a deal to sell Canadian hydrogen to Germany will serve as only a small, far-off and expensive part of the solution to Europe's energy crisis.

The government of Alberta is looking to draw skilled workers from Toronto and Vancouver to the province and launched its recruitment campaign Monday morning.